This isn't a commentary on the state of the current presidential campaign, but a puzzle posed by Thoreau's Journal entry of October 20, 1856:

"Amid the young pitch pines in the pasture behind I notice, as elsewhere of late, a great many brownish-yellow (and some pink) election-cake fungi, eaten by crickets; about 3" in diameter.  Some of those spread chocolate-colored ones have many grubs in them, though dry and dusty."

Previously, on July 29, 1853 he wrote:  I also see some small, umbrella-shaped (with sharp cones), shining and glossy yellow fungi, like an election cake atop, also some dead yellow and orange.

After reading that, I set off today to photograph Fairyland Pond (once called Hubbard's Close) and Brister's Spring and to seek the likeness of Henry's election-cake fungi in the pitch pine barrens atop Brister's Hill.  No luck as yet, but I encountered some other outstanding late October mushrooms. 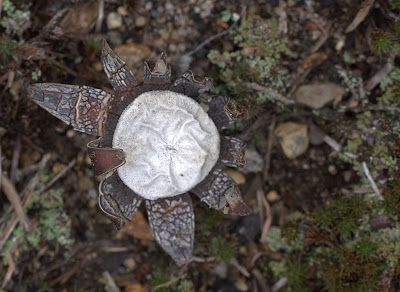 Cinnabar polypore (Pycnoporus cinnabarinus) was growing nearby on a dark, fallen cherry log. 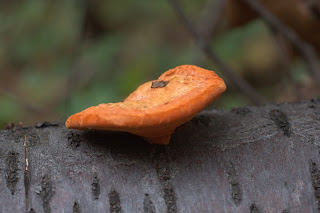 I spotted this next one as I followed the trail back down Brister's Hill.  This was growing in the crotch of a dying white oak tree that clung to the steep slope of the hill and looked like chicken-of-the-woods fungus from a distance.  I clambored down for a closer look and discovered these delicate fangs of the Milk-white toothed polypore (Irpex lacteus), unfortunately but understandably in the shadows on the north side of the tree. 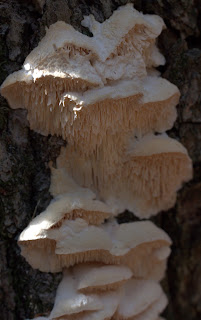 Still curious about the election-cake fungus, however, which Thoreau describes twice in his Journal in separate late October entries.  What is it and does it's name coincide with election season or is it one of Thoreau's playful sarcasms.

I welcome any leads on the election-cake fungus's true identity.
Posted by Cherrie at 11:00 PM