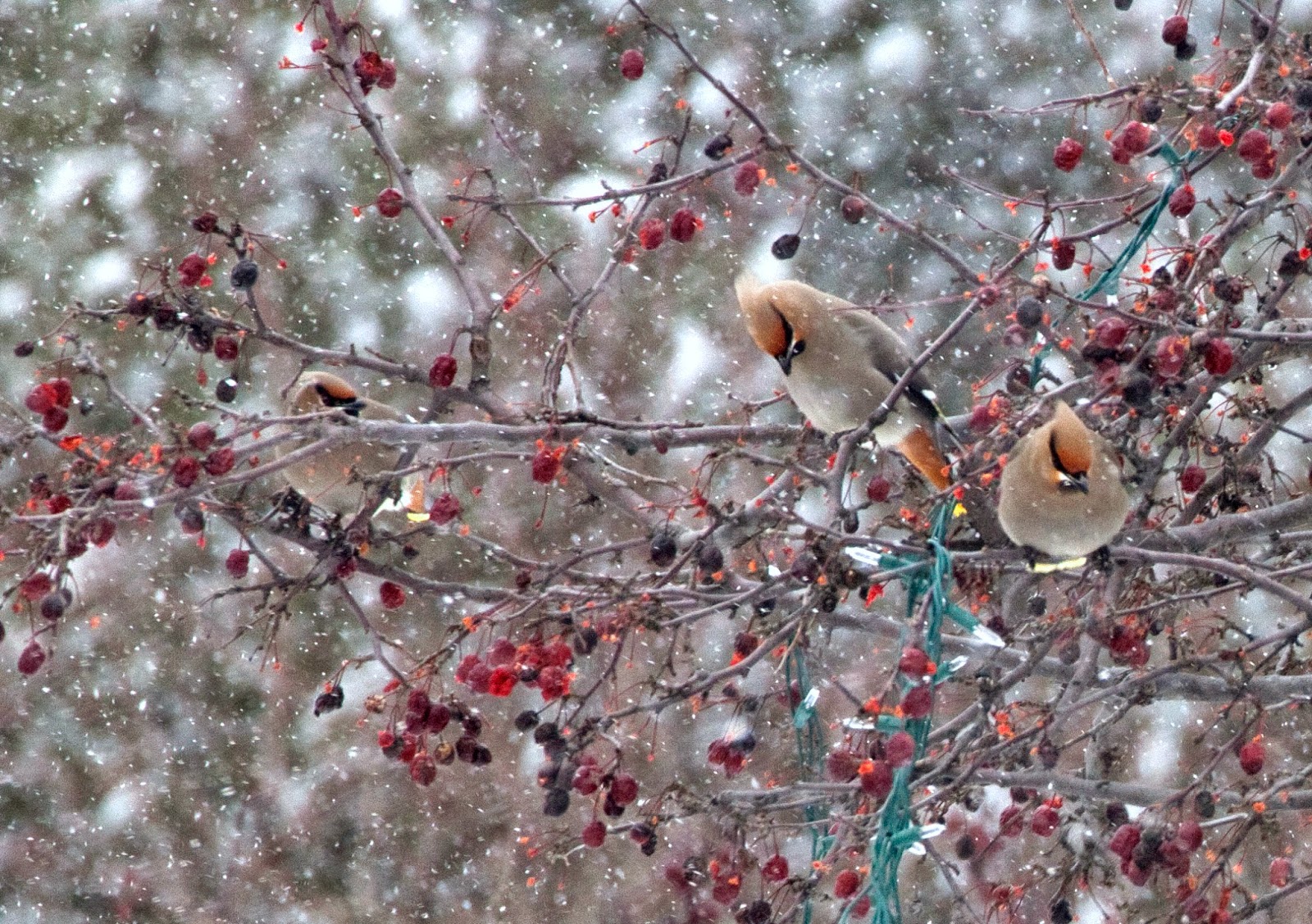 While Gardner Bohemian may well describe how I felt growing up in this town in the 1960's, this winter it's being applied to a huge flock of rare Bohemian waxwings (some 180 strong) who flew into town in early March and have been gorging on crab apples ever since.  Yesterday while visiting my dad, I had the chance to visit the crabapple trees outside of Heywood Hospital where some 130 Bohemians were feeding in the wind-driven snow. 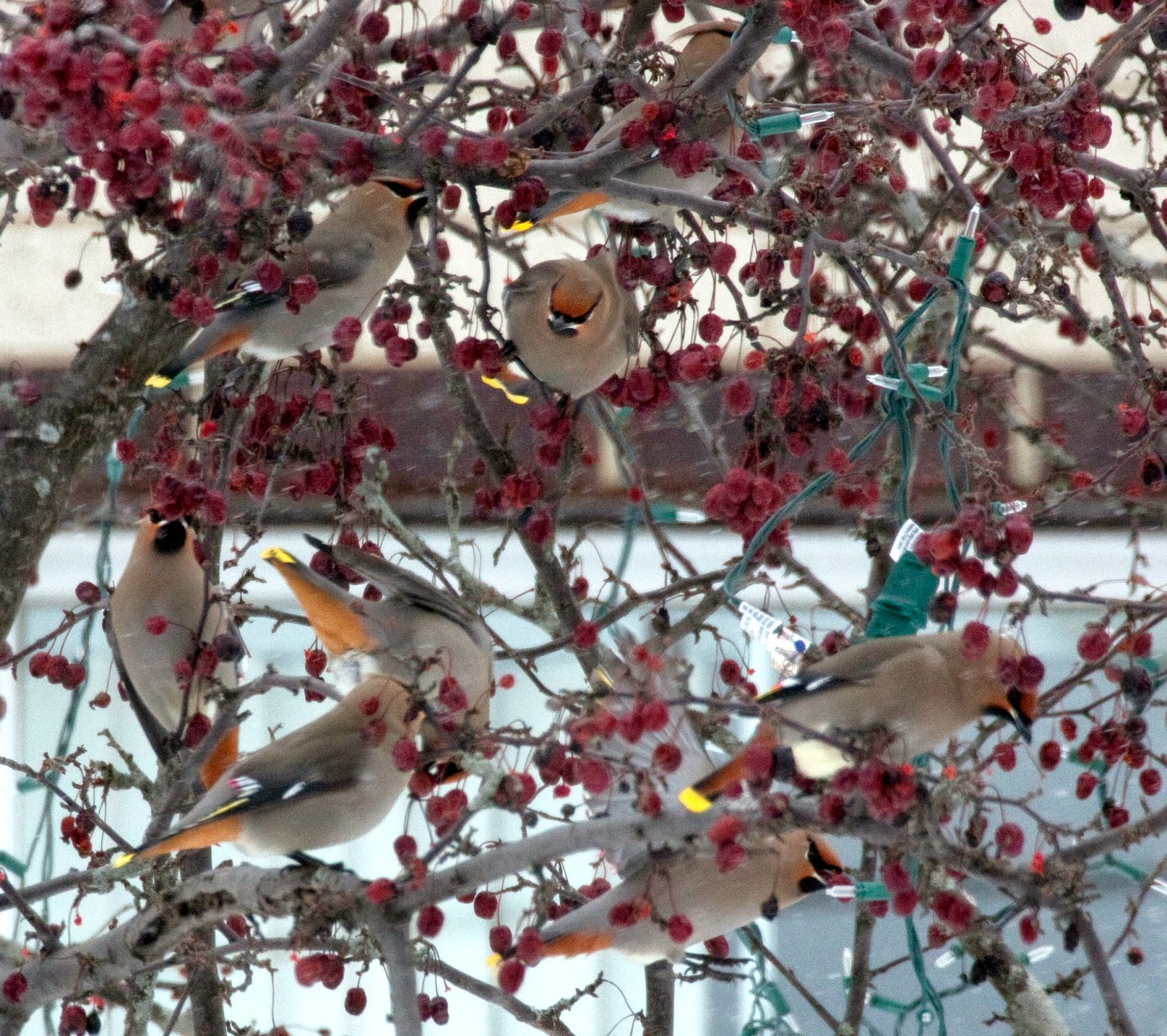 In a typical winter, dedicated birders will drive miles to see one or two reported Bohemians hanging out with a flock of our more common cedar waxwings.  Bohemians are a wandering lot, creating no permanent territory of their own.  They breed primarily in the taiga far in the northwestern reaches of Canada and Alaska, where cloudberries and insects are their delicacies, traveling from there into the northern edge of the U.S. in the winter in search of dried fruit.  With this winter's prolonged polar blast, snow cover, and abundant ornamental fruit supplies, an unusual number found their way into Massachusetts, mostly as individuals.  A long-term visit from a flock this size is phenomenal and gives observers a chance to experience a more natural range of Bohemian behaviors. 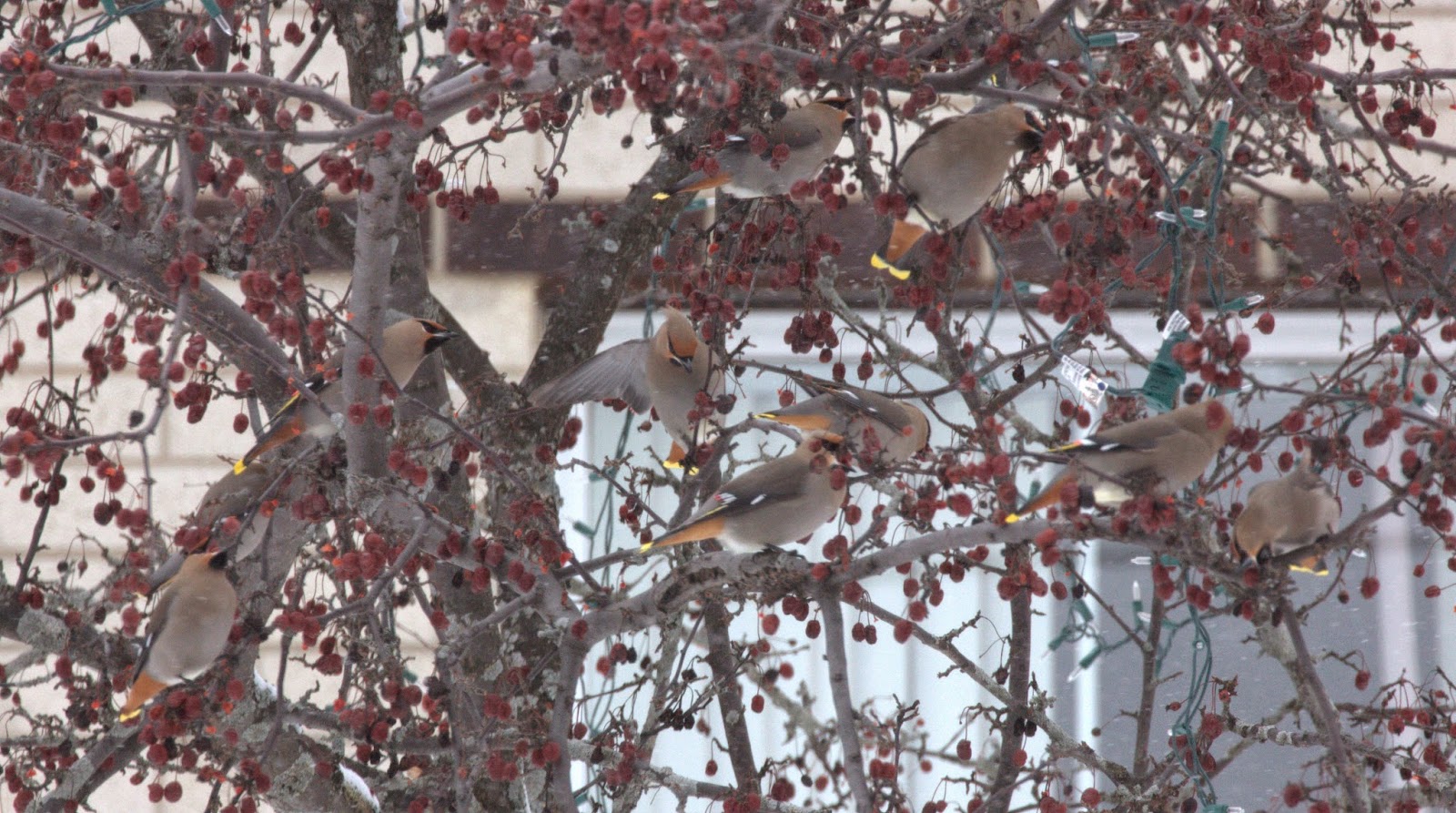 Remote as their breeding grounds are, wintering Bohemians are more likely found near civic buildings and golf courses in northern New England towns where crab apple trees are abundant.  The Gardner Bohemians have been found foraging outside of the town's hospital, Elks Lodge, courthouse, and Mount Wachusett Community College where fruit trees have provided abundant sundried apples, which they boldly swallow whole, their determined feeding reminding me of great blue herons trying to swallow fish. 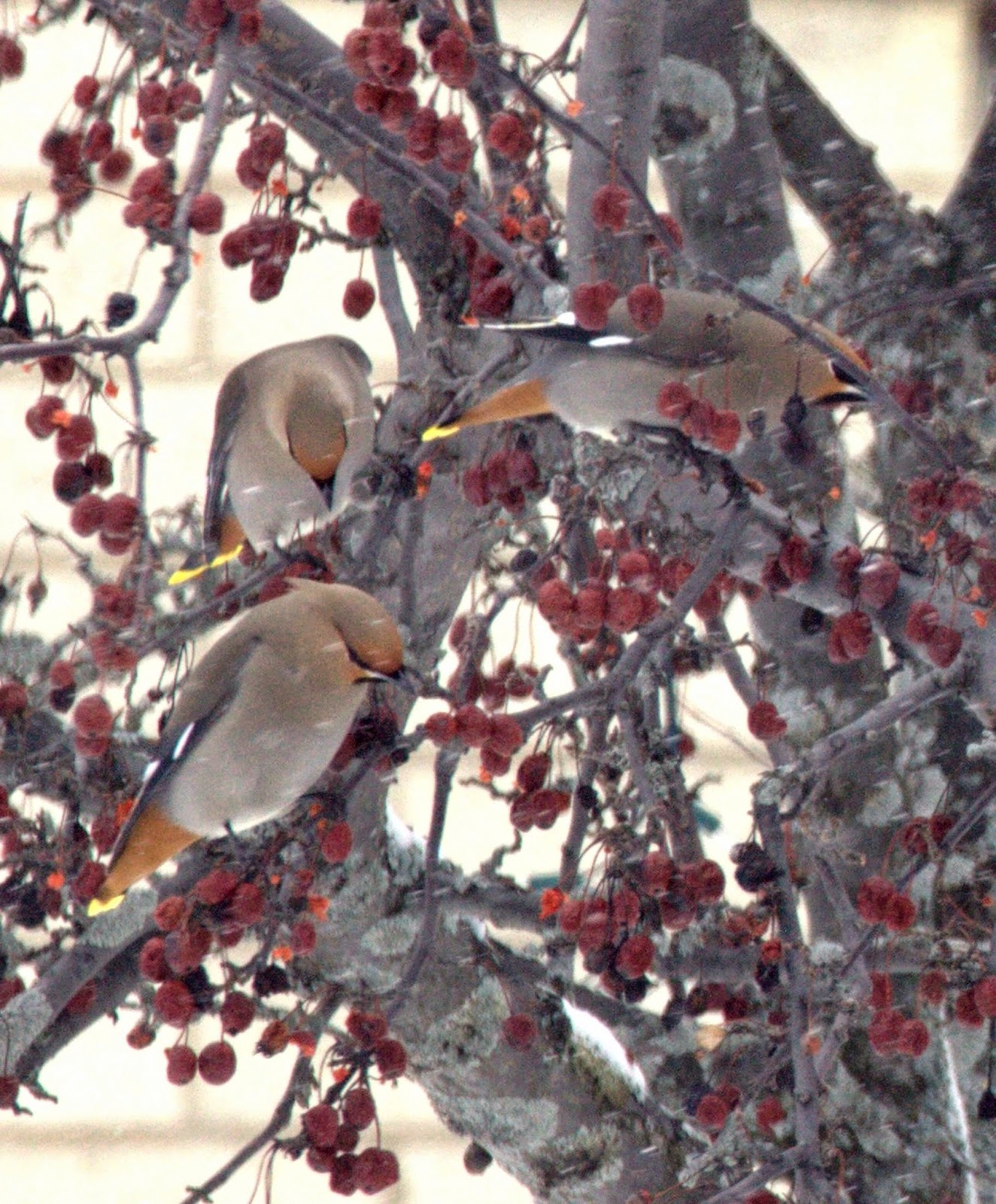 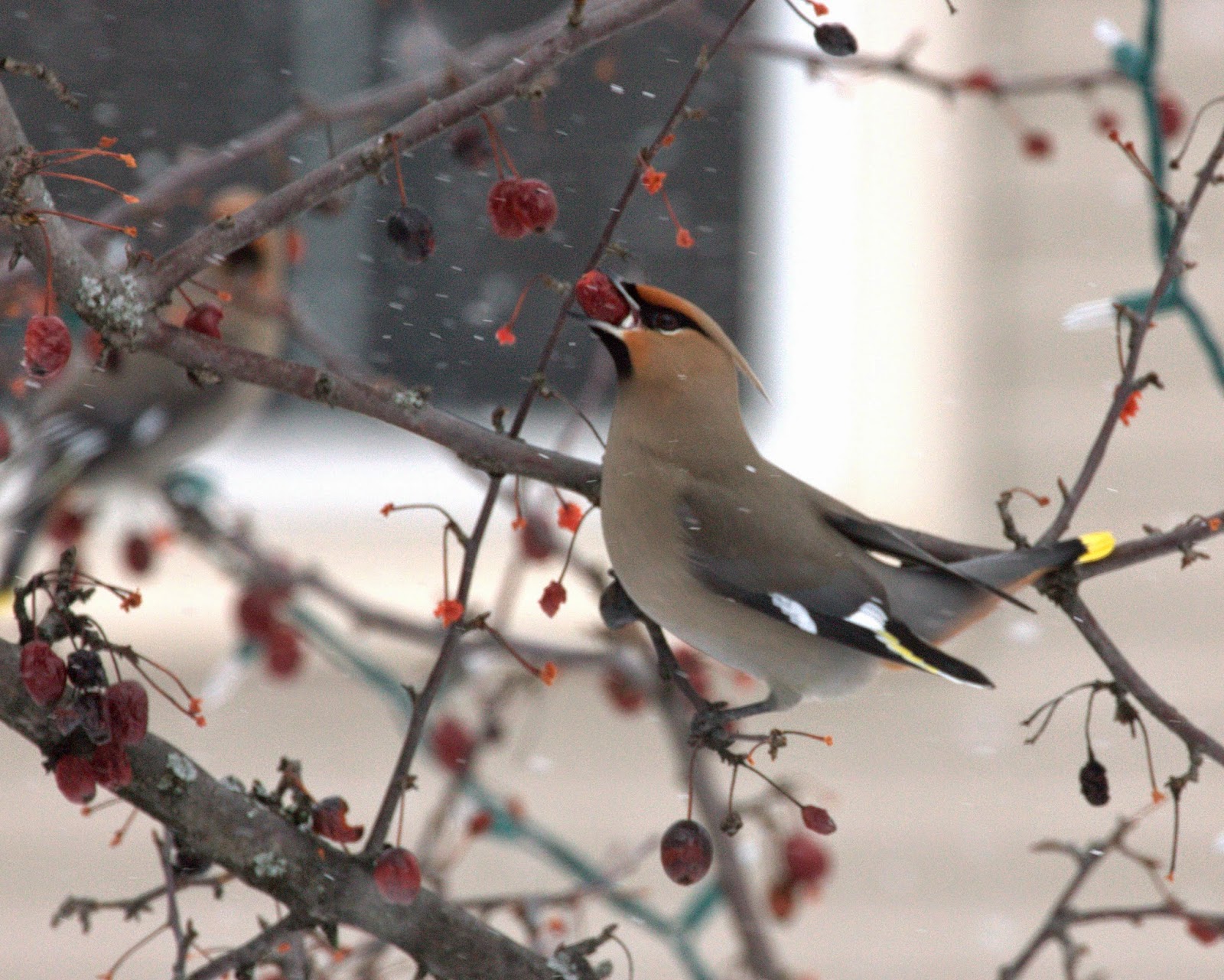 Their favorite trees are still strung in holiday lights and thick with fruit. Photographing the feeding frenzy is challenging.  The birds sit motionless, chatting, and digesting at the top of a nearby 50' sugar maple tree.  Then they begin to stir and the whole flock lifts up, swirls in overhead, and descends like a cloud of smoke into a single tree, feeding wildly for less than 10 seconds, then grabbing extra fruit, they swirl up again and back to their resting tree.  They are very sensitive to noise and nearby movement while feeding, but became comfortable enough with my unmoving presence that they finally came in to feed right next to me.  I loved seeing these wild denizens of the north so boldly and gregariously eating amidst the trappings of civilization, so I chose to leave these details in my portraits of them. 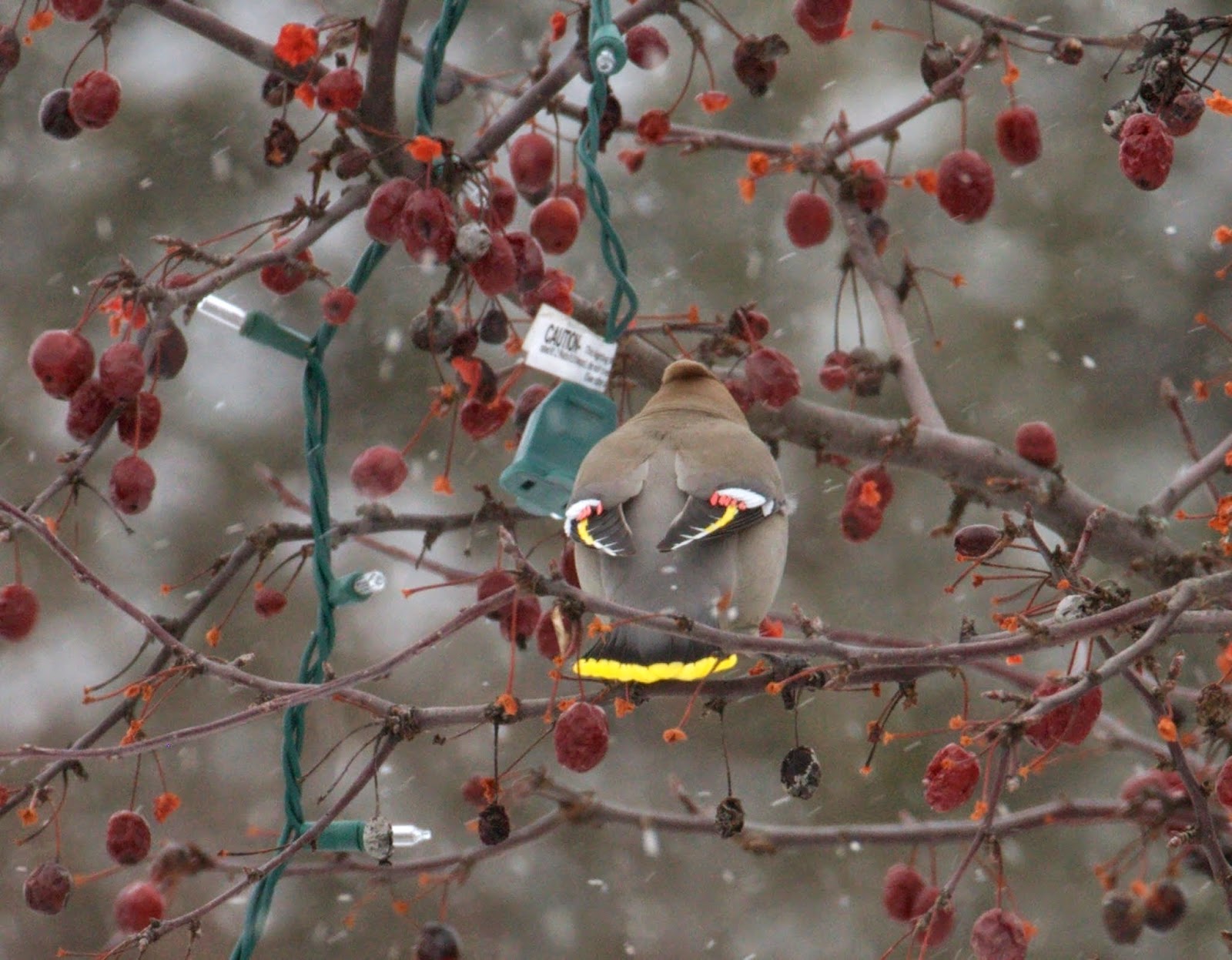 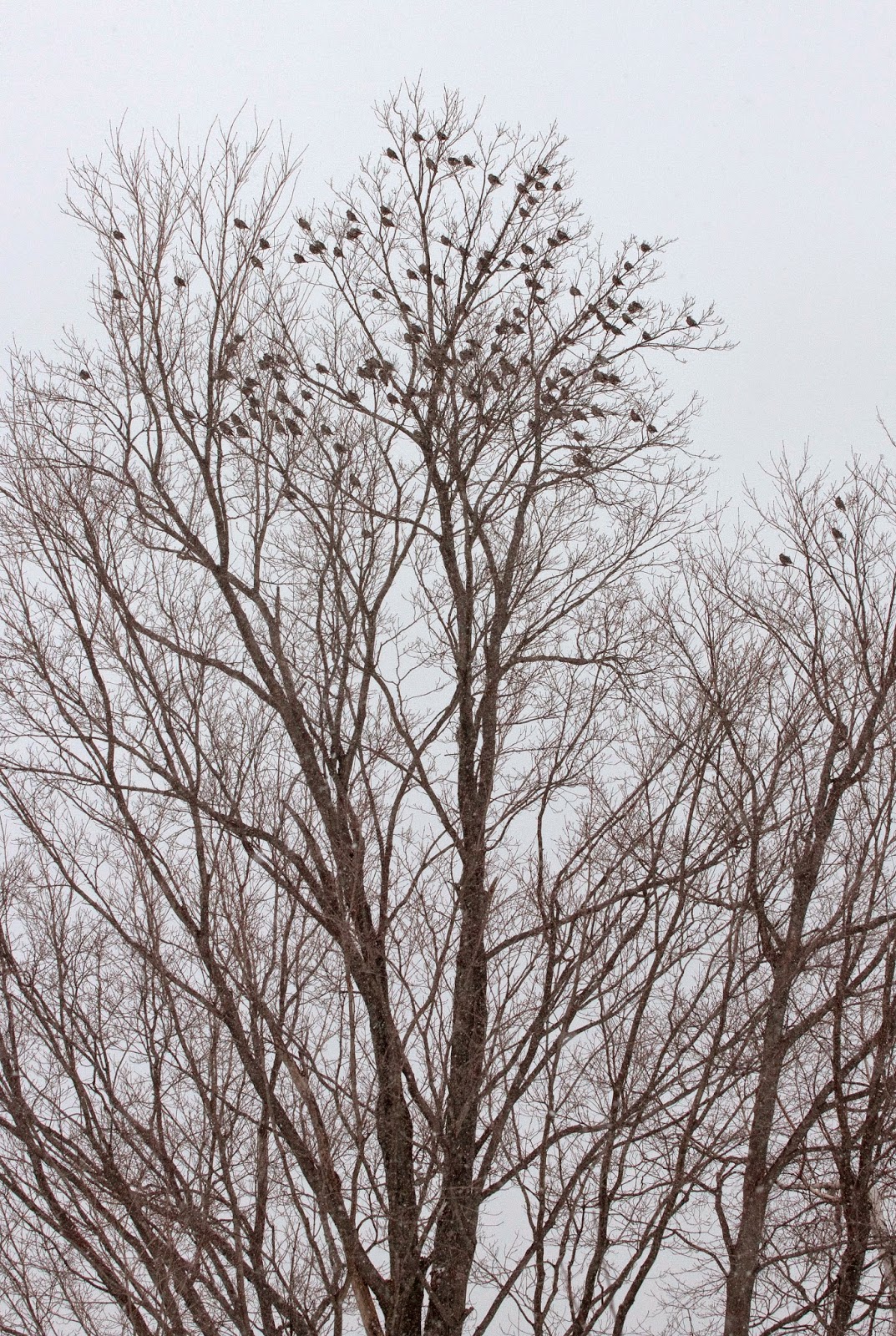 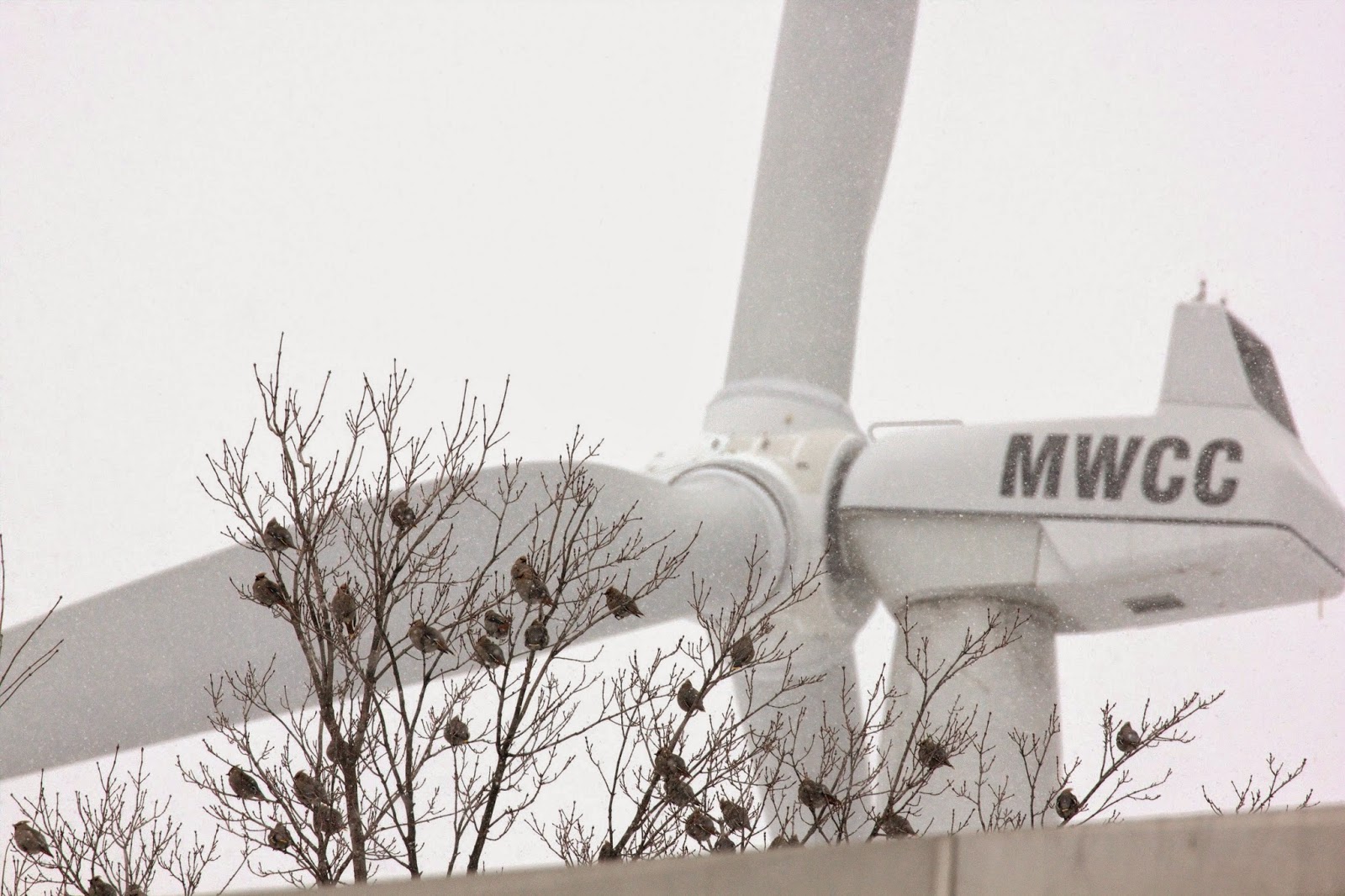 Two huge wind turbines flank the field near the Bohemians resting tree providing a somewhat jarring visual counterpoint to the whole scene, though the sound did not seem to bother the birds.  On my previous day's visit, the birds left their roost and flew like a large black cloud down the middle of Green St. to the community college beyond.  I followed them to see where they were choosing to feed and found them dispersed on either side of the road in front of the college, taking turns joining a gathering of blackbirds and robins who were feeding on some fruit laden staghorn sumacs near the road.  Good to know we also have acceptable wild fruits to sustain them on their long journey north.

As always, happy to see wildness prevail in my hometown.
Posted by Cherrie at 12:44 PM 4 comments:

At 7 pm, the US National Weather Service announced that this evening's snowfall (measured at Logan Airport) brought our 2014-15 winter to a record breaking 108.6," an inch above the 1995-96 record, and this winter it never melted! 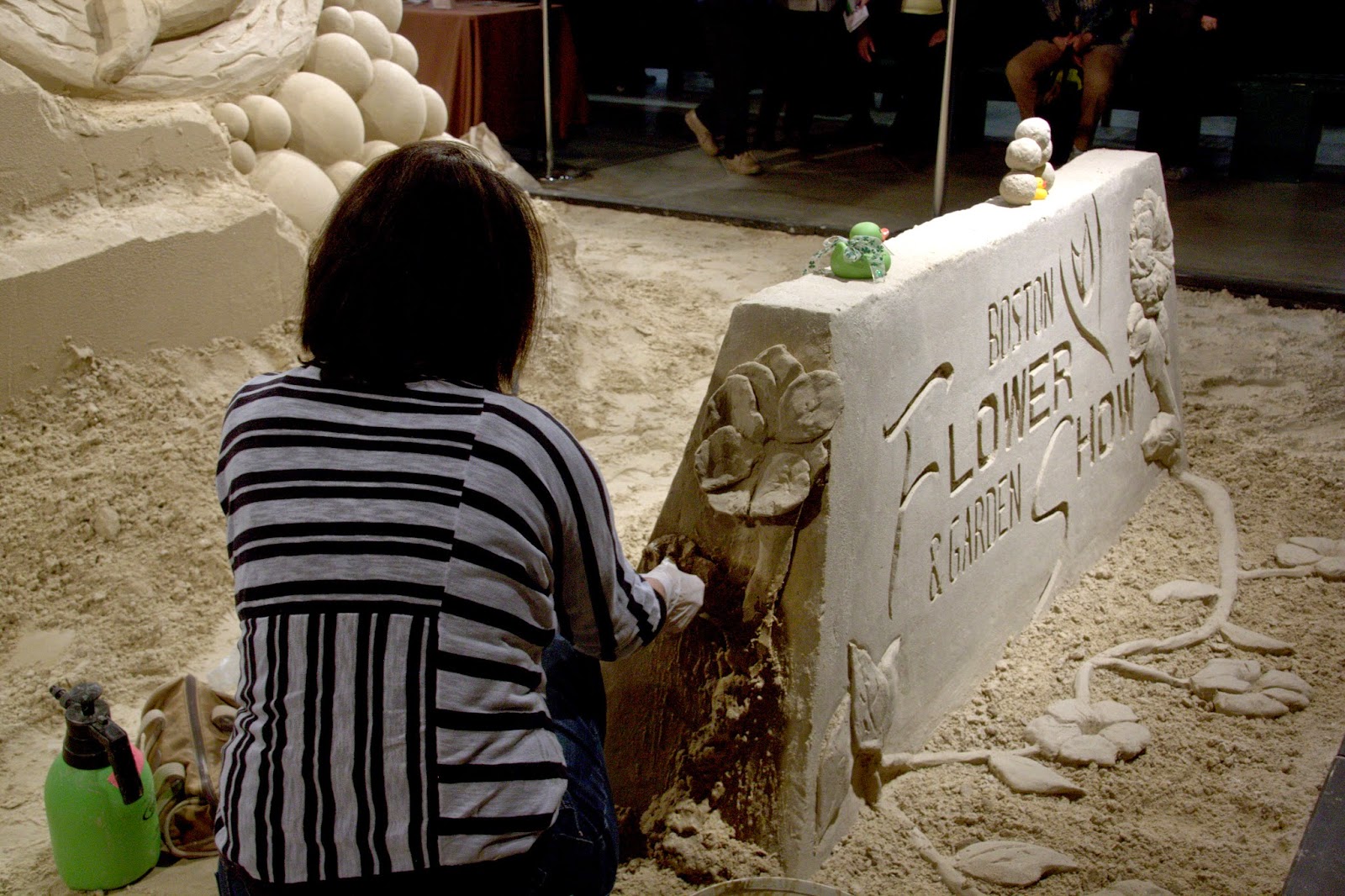 It may be fifteen years since I last indulged in Boston's March flower fest, then and for more than a century known as the New England Spring Flower Show, hosted by the venerable Massachusetts Horticultural Society (History of the Flower Show in Boston).  Once again on historic Commonwealth Pier, now gussied up as the Seaport World Trade Center, the Boston Flower and Garden Show bears but a wisp of resemblance to the skillfully and extravagantly wrought displays of yore.  Still, the company of a dear friend from Maine and this week's beautiful, more springlike weather made the whole experience feel like a familiar and welcome seasonal right of passage. 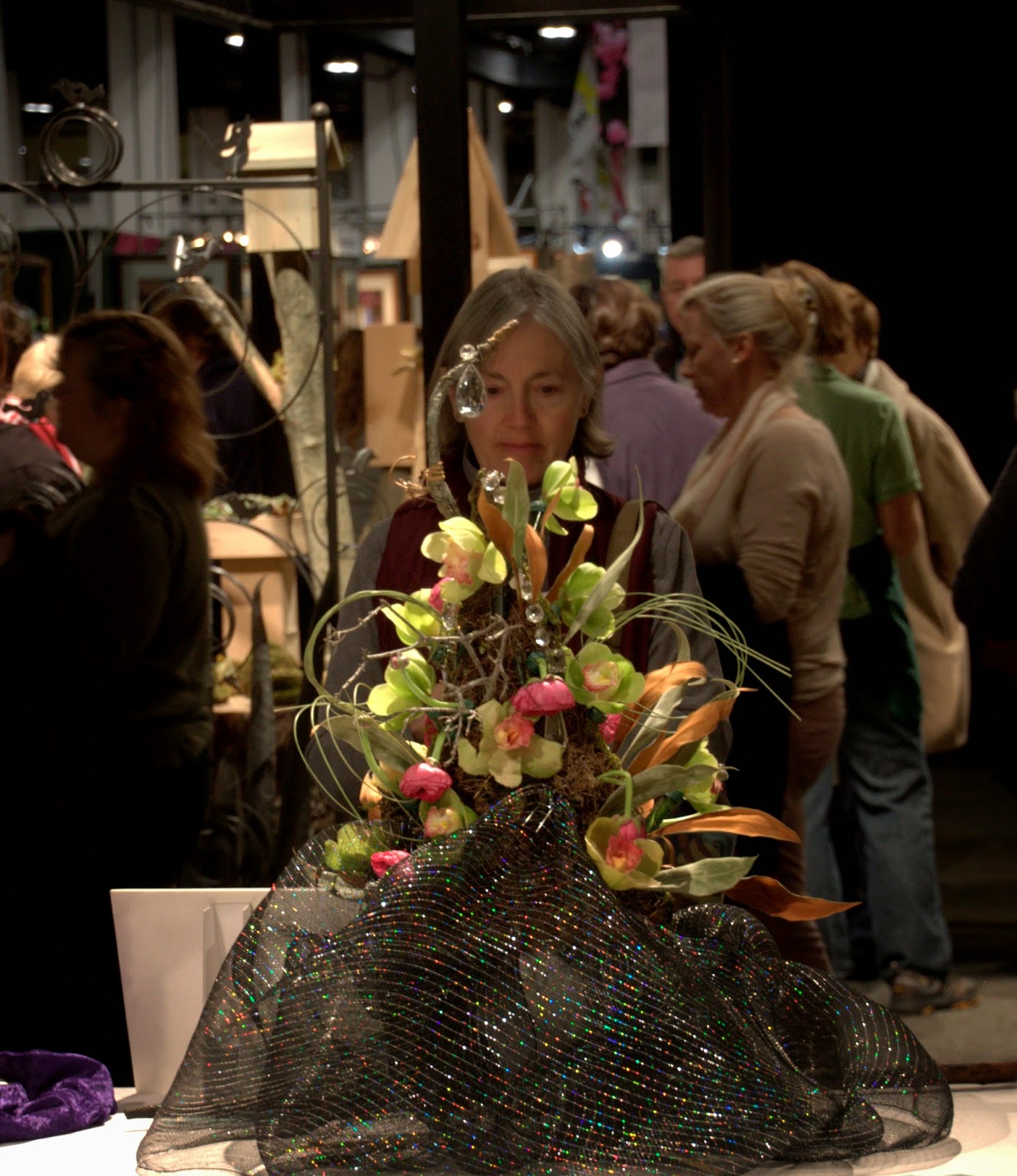 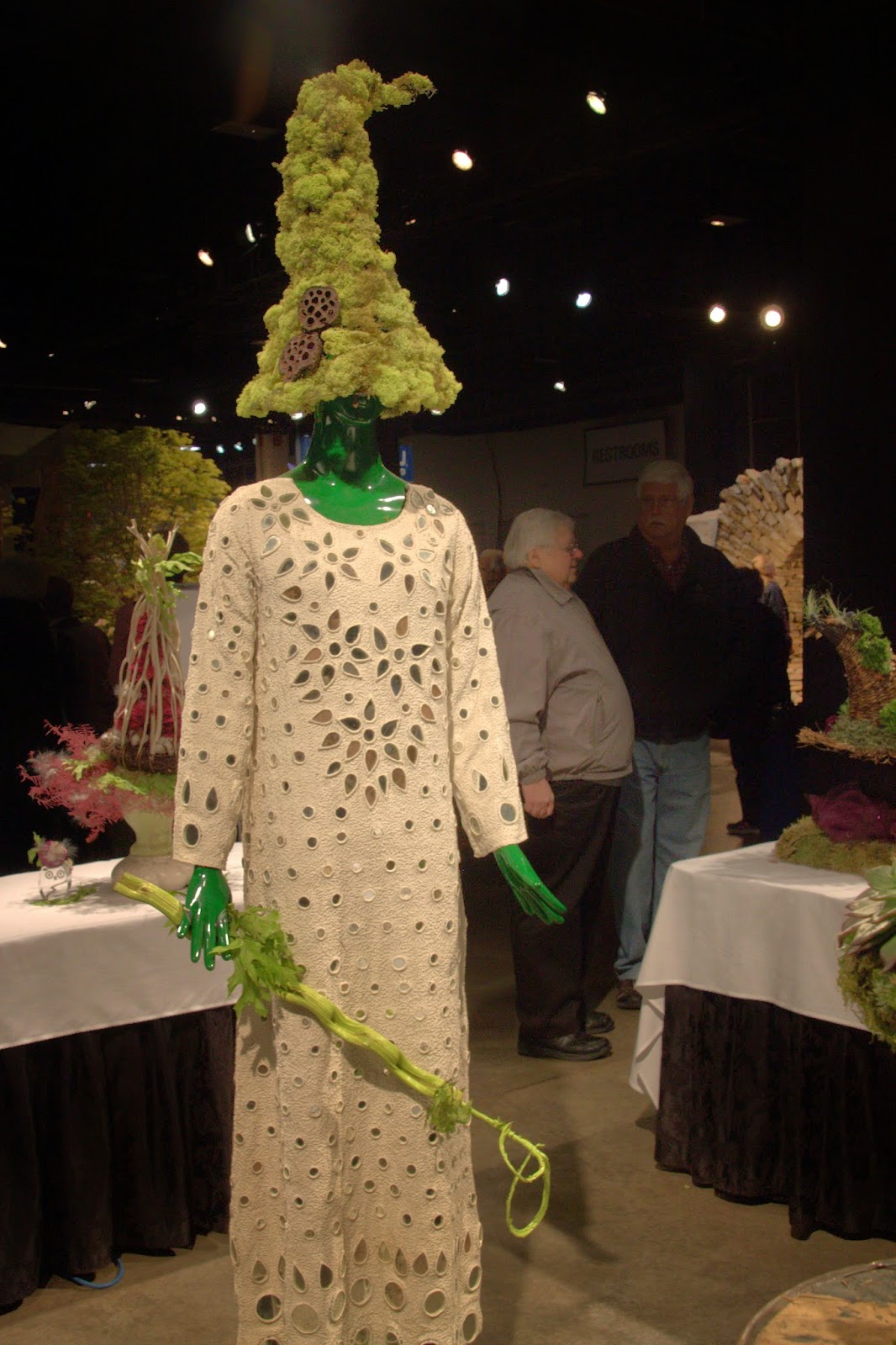 For me, this hat's magic was concentrated in unusual bundlings of potent plants - small luscious orchids, polypody ferns, selaginella, and mushrooms. 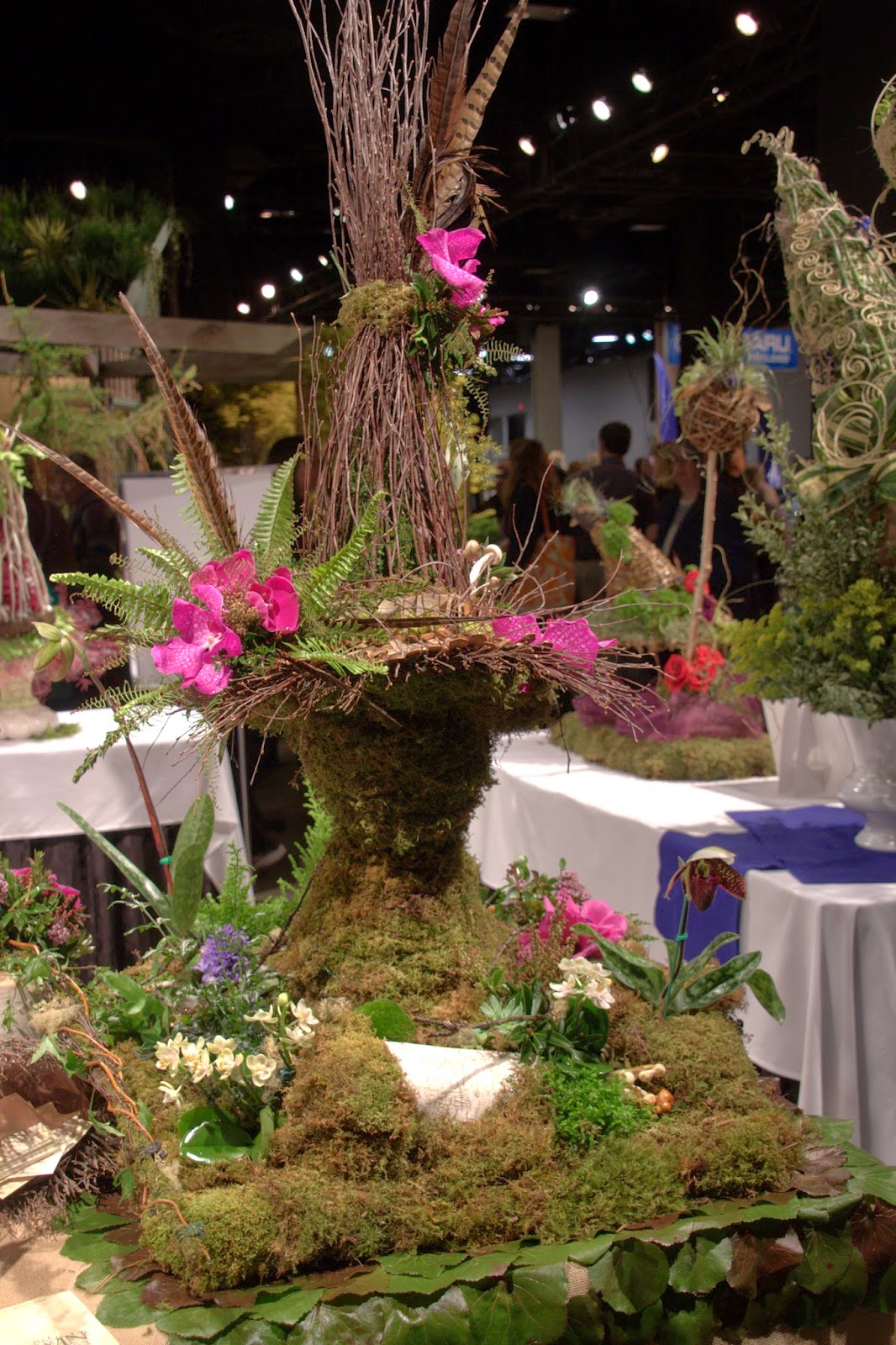 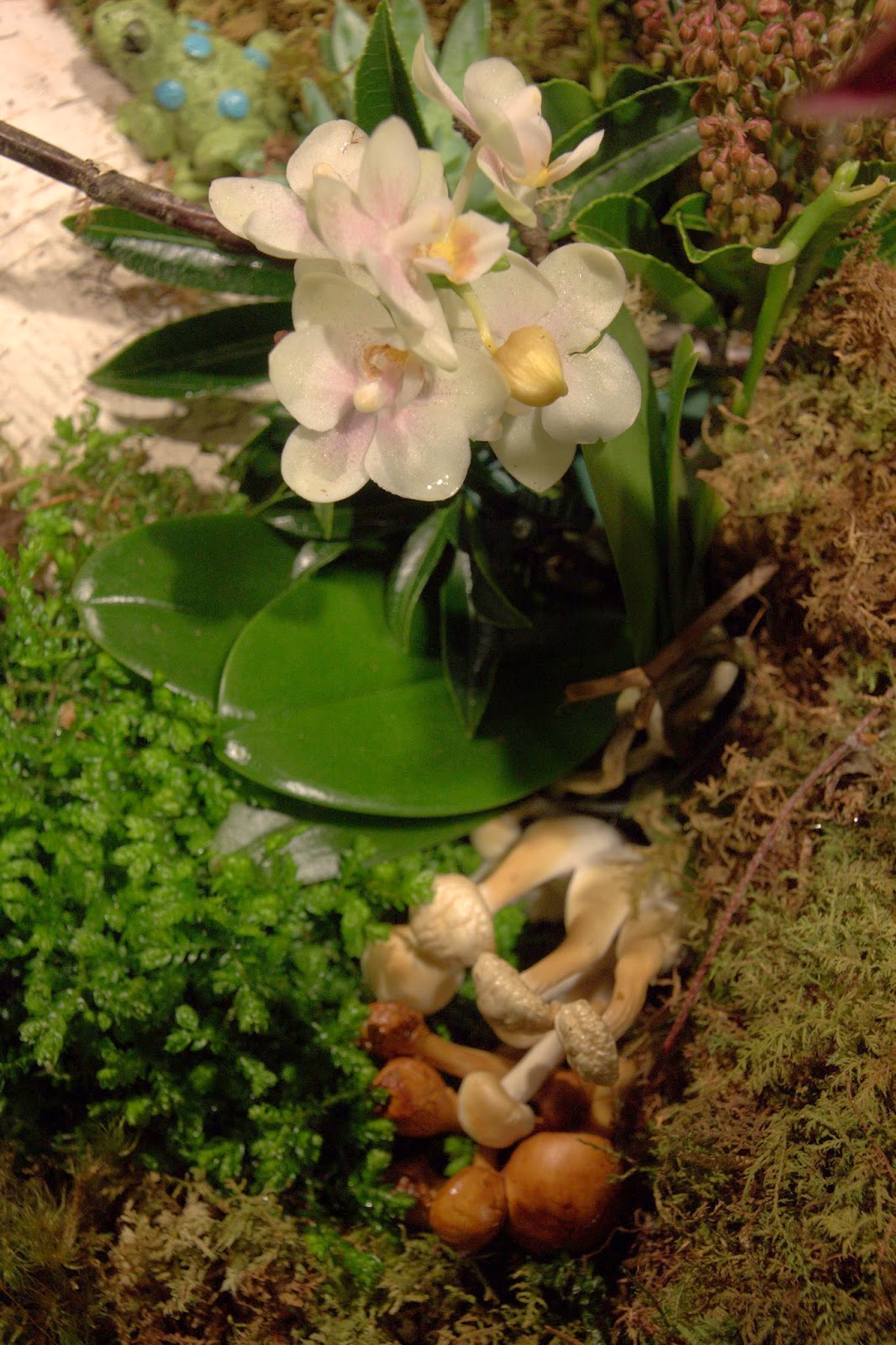 It was the miniature horsetails (lower right) that drew me to this bonsai container garden.  A "windswept" Juniper horizontalis grows from the top of this porous rock fountain with mosses, baby's tears, and the dwarf horsetails below. 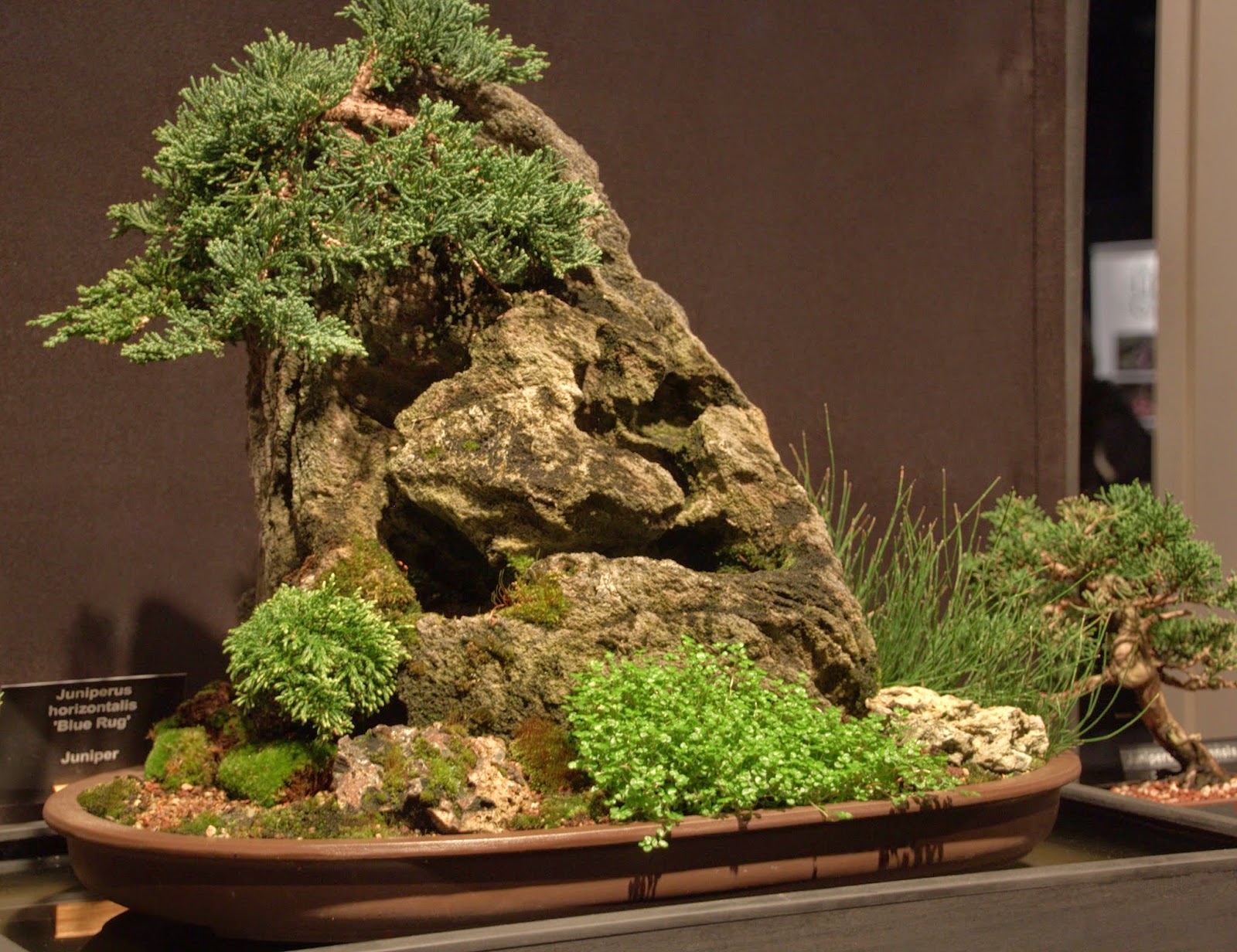 Ocean Spray created a very appealing diorama of a cranberry bog surrounded by the accoutrement used in the harvest. 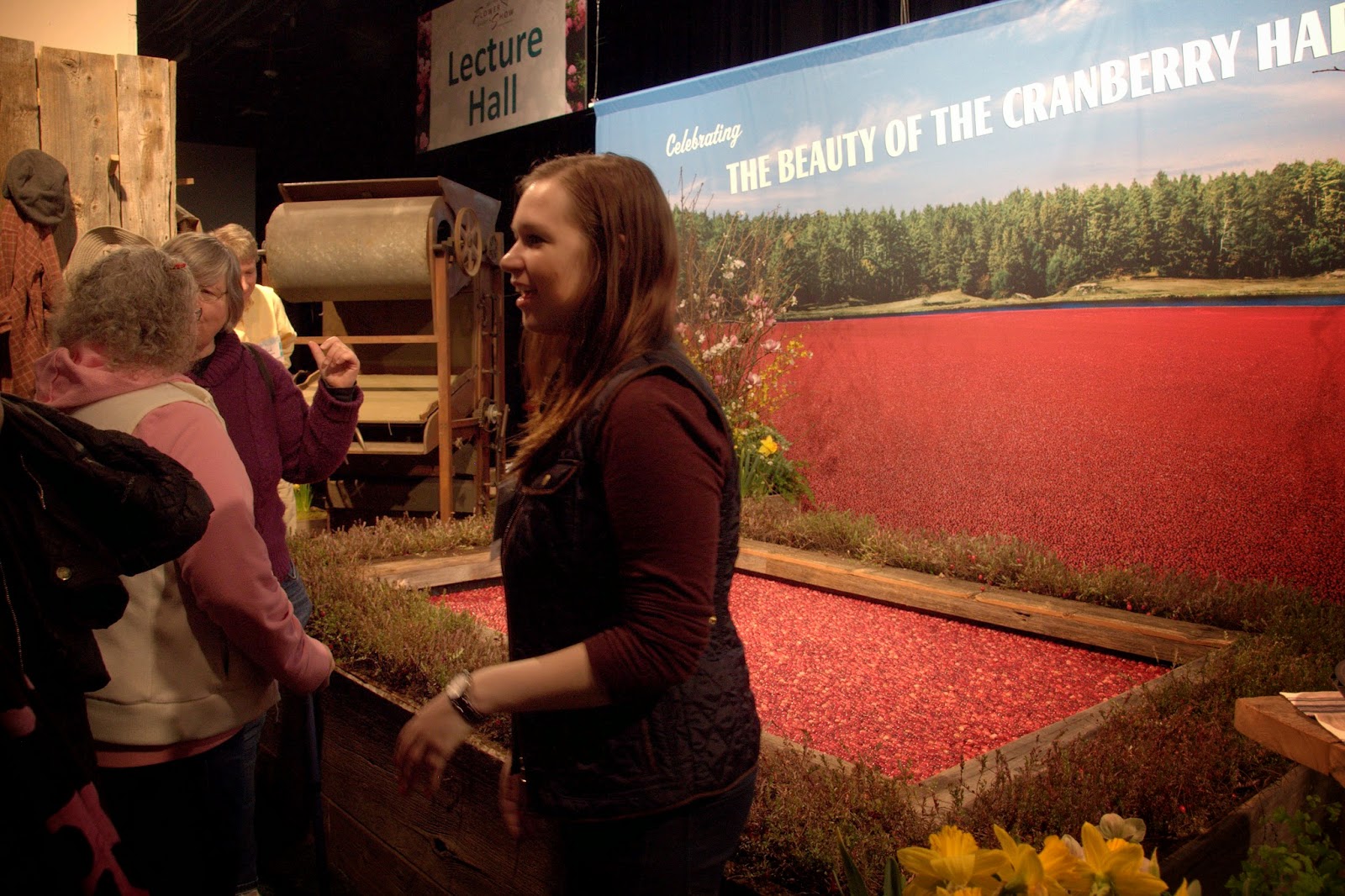 In addition, we were pleased to see the Mass. Dept. of Agricultural Resources' particularly informative display on the Asian longhorned beetle and Emerald ash borer and learn about the Massachusetts Master Gardener Assn., a non-profit that formed to carry forward this in-depth training and service program that was discontinued by the state due to budget cuts.  (VT, NH, and ME still fund their own excellent programs at the state level.)  We also sat in on the wonderfully informative presentation given by the Rose Kennedy Greenway horticultural staff, who I met two summers ago on an inspiring tour of the Greenway with them and my Concord friend Paul Kelly (chief horticulturist for Boston's Federal Reserve Bank).  A blog post on that expedition is forthcoming.

With its Suburu sponsor featured prominently within the main exhibition area, the marketplace occupying two-thirds of the entire hall, and commercial businesses producing most of the installations, the flower show has a decidedly more commercial atmosphere than in decades past.  Still, the familiar scents of bark mulch and mingling floral fragrances still evoked my long distant memories of the sheer exhilaration of my first flower show experience in 1978, both as a visitor and one of the privileged few who helped to produce an exhibition.  Having spent my early years with grandparents who were both florists and horticulturists, as well as gardeners, my personal sense of place has deep roots in beautifully arranged and lovingly tended green and flowering environments - and the flower show has always felt a bit like home.

I recently discovered slides that I made of the spectacular 1978 New England Spring Flower show and hope to scan and post those soon.