Historic Moore's Swamp in the Crosshairs

Concord is in the throes of deciding the fate of Moore's Swamp, a large and historic wetland that wraps itself around Sleepy Hollow Cemetery and is partially bisected by Bedford St./Rte. 62, which was constructed in the mid-1800's during Thoreau's lifetime.

On June 19, Moore's Swamp will once again be the focal point of a Natural Resources Commission public hearing to rule on a Notice of Intent (DEP File #137-1178) filed by Concord's Dept. of Public Works.  The DPW has proposed to clear and re-engineer clogged drainage culverts and effectively drain the swamp in an attempt to address some current and possible high water concerns.  Many are concerned that such action could fundamentally alter this important habitat for the town's rare Blanding's turtles, a growing and thriving great blue heron colony, an active beaver population, and a great diversity of wildlife and woody and herbaceous plants who make their home in transitioning red maple swamps.

In his Journal, Thoreau left us a detailed description of Moore's Swamp more than 150 years ago, making it clear that it was, even then, a well established wetland with significant water depths, even in it's driest seasons when a thick crust of vegetation and debris covered its surface.  His observations are instructive and give us insight about the natural processes that are the focus of our town's concerns today, though now blamed on the beaver:

July 6, 1853.  I can sound the swamps and meadows on the line of the new road to Bedford with a pole, as if they were water.  It may be hard to break through the crust, but then it costs a very slight effort to force it down, sometimes nine or ten feet, where the surface is dry...The larch grows in both Moore's and Pedrick's swamp.  Do not the trees that grow there indicate the depth of the swamp?...I drink at the black and sluggish run which rises in the Pedrick's Swamp and at the clearer and cooler one at Moore's Swamp, and, as I lie on my stomach, I am surprised at the quantity of decayed wood continually borne past.  It is this process which, carried on for ages, formed this accumulation of soil.  The outlets of the valley being obstructed, the decayed wood is no longer carried off but deposited near where it grew.

Thoreau's account continues, documenting with some amusement, the engineering challenges encountered when the town tried to run the new Bedford road through the swamp:

...Part of the Bedford road in Moore's Swamp had settled a few days ago, so much more that the water was six inches deep over it, when they proceeded to cart on more sand...half a dozen rods in length suddenly sank before their eyes, and only water and sand was seen where the road had been...As I calculate, at least ten feet in thickness of sand have been placed on this swamp, and the firm mud could not have been less than a dozen more...The weight of sand suddenly jerked this tremendous weight of mud right back onto the road, bottom up...a few rods more, with the culvert went down so that it was a full four feet under water, making it some seven or eight rods in all. Here was probably once a pond, which as filled up and grown over, but still a relic of it survives deep under the mud in the deepest part....There are thus the relics of ponds concealed deep under the surface, where they are little suspected, perchance, as under cleared and cultivated swamps or under roads and culverts.

Join me now for a brief tour through Moore's Swamp beginning in the winter of 2013.  I will continue to add new photos as warm weather and new life return to the wetland. 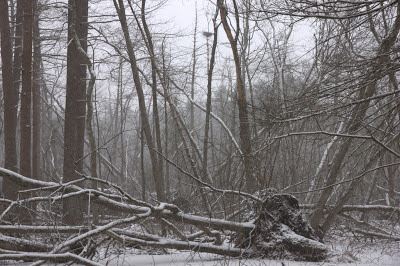 Sixteen nests were counted in the swamp last winter, with twelve being occupied by late April.  I took these photos of the first returning pair going through their courtship rituals of display, caressing, and nest repair on March 21st.

On March 24,  I returned to take check the colony and, while observing the nests, the initial pair  began to mate. 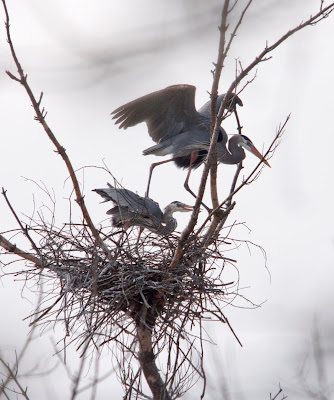 By mid-May, the swamp is a green, glowing expanse filled with birdsong and frog calls. Thirty-one heron nests can now be counted with twenty-four occupied.  Chicks are gaining size and strength and keeping their parents very busy. 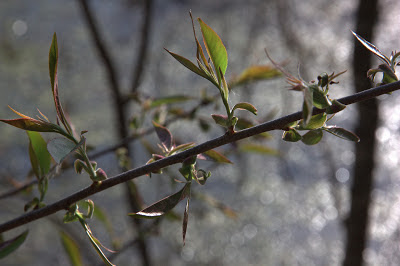 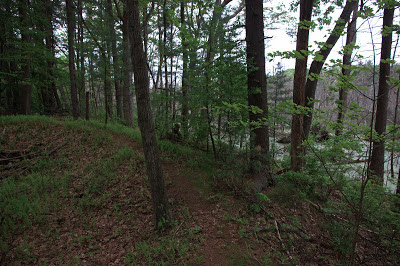 3/16/16 update:  Matters of swamp drainage, hydrological management, and the critical impact this may have on this unusually diverse wetland and Blanding's turtle habitat and nursery will be up for a final critical review at a Natural Resources Commission meeting at 7 pm on Tues., March 16, 2016 in the first floor meeting room at 144 Keyes Road.  There is serious concern about the current proposal under consideration, by both area citizens and scientists.   Please come out to express your support and concern.