Over the last nine years of regular forays around Great Meadows, there are a few memorable moments that pulled me deeper into the wild intimacy of this refuge like no other.

Yesterday at dusk, I walked slowly along the westbound dike trail scanning night song for the bubble and squeak of rusty blackbirds, when I spotted a young red-tailed hawk high above in trees.  As I raised my camera to catch his silhouette against the sky, he plunged headlong in front of me, crashing into the tangle of cattails beside the trail.  I stood for many minutes in the chilling sea breeze waiting for movement or sound until the hawk finally stumbled into view, his foot seemingly caught up on something.  But it soon became clear something was caught up in his talons...a male wood duck. 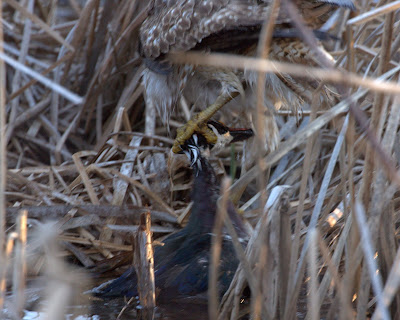 He dragged the duck partially up out of the water, then spent a long hour feasting. 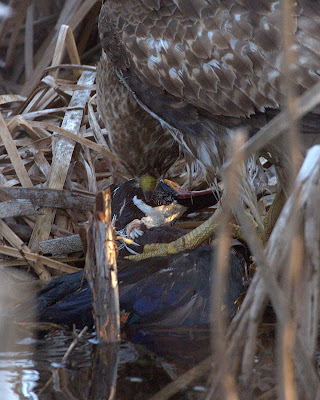 It's hard to get a close view of these beautiful and demure little ducks in the impoundments due to their overly secretive and skittish temperament, but there are many within the refuge.  Love them as I do, I was impressed by this young hawk's brazen hunting prowess. 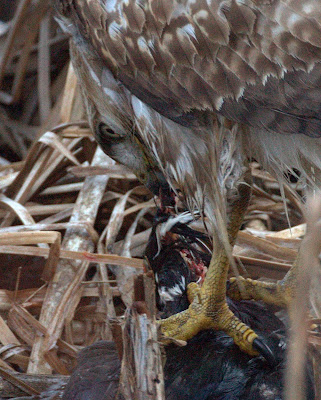 Leaving the red-tail to his feast, I continued on toward Borden Pond, still listening for rusties and watching waves of other blackbirds flying into the refuge to roost for the night.  Now 7 pm,  the sun cast a raking light over neighboring Hutchins Farm fields and their alternating bands of freshly cultivated soil and emerging spring grass.  These bright horizontal lines crossing the dark vertical rise of silver maple silhouettes and reflections along the river projected a compelling scene out to the trail as I passed by. 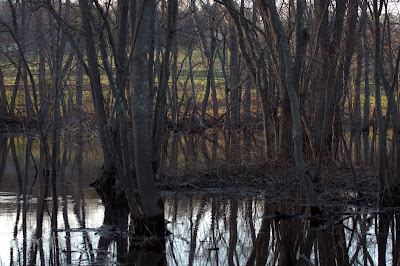 Borden Pond and its outflow into the refuge impoundment were bathed in this delicious evening light, revealing the beaver lodge that is usually well camouflaged. 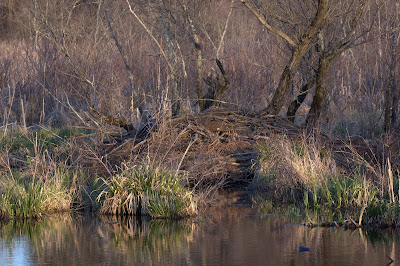 A dark, floating semi-sphere caught my eye out in front of the lodge that signaled a turtle's presence.  It was motionless for so long that I nearly abandoned my patient vigil, when suddenly it jerked, rose, then sank a bit before going motionless again. Thinking it might be mating snapping turtles, I continued to watch.  There were remarkably long stretches between movements with no sign of a head reaching up for air.  Suddenly, a second dark half-dome appeared moving toward the first and disappeared just a quickly. 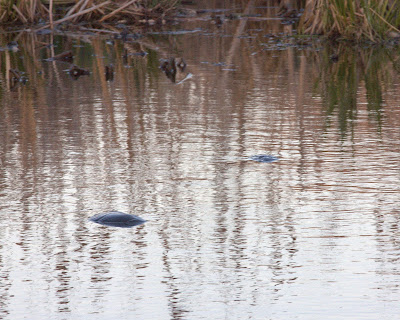 In the shadowy half light, I began to think my eyes were fooling me, until at last a head appeared, strangely disconnected from the body, with a face eerily resembling ET's.  A very large snapping turtle indeed. Satisfied with my turtle ID, and now feeling like a cold-blooded reptile myself, I began my return along the trail accompanied by another walker I met at the pond.  We stopped to check on the young hawk and its quarry, which she hadn't previously noticed.  As we arrived, he looked up, soaked and blood-stained, and apparently sated. 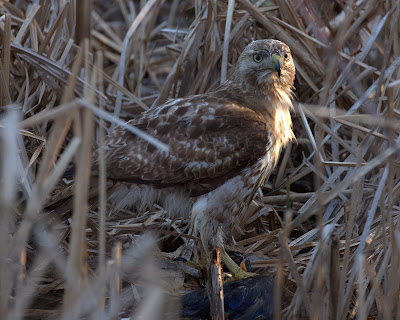 He shook out his feathers and leaped into the air, only to land just five feet from where we stood. 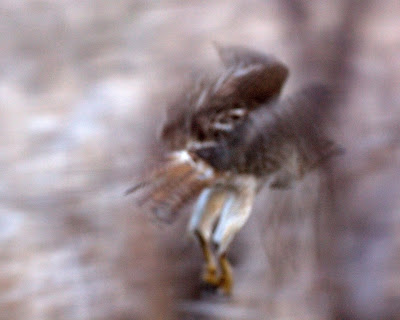 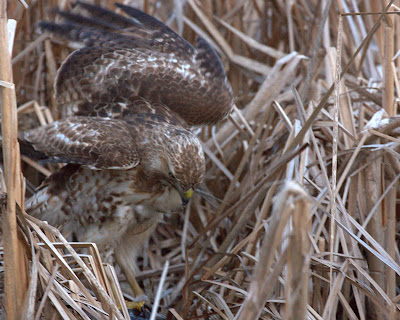 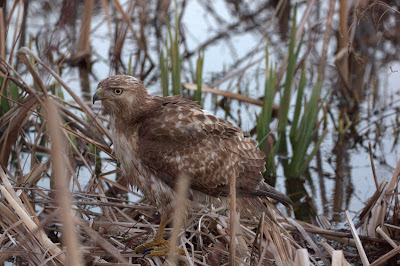 Then he flew back up into the tall silver maples, shaking and spreading his soggy wings in the chilled night air.  He'd been standing in the cold water for over an hour and the dipping temperature would make drying out difficult. 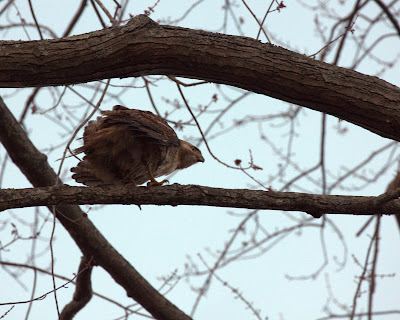 I walked on admiring his diligence and fortitude and with a deepened appreciation for my own dinner that was waiting at home.