Yesterday, I took a walk around Great Meadows on pristine, snow-covered trails, canopied by a pure blue sky.  Long stretches of sparkling white were unbroken by the footfalls of visitors and patterned by resolute tracks and foraging signs of wildlife and the intricate shadows of its rooted residents.  Several scenes stood out for early April, and one was a first for any of the colder months.

Green on white, multiflora rose...a sequence we don't want to see in early April.  Though multiflora rose and other invasive shrubs tend to be some of the first to leaf out, the heat spikes of February and March prompted buds nearly two weeks early this year. 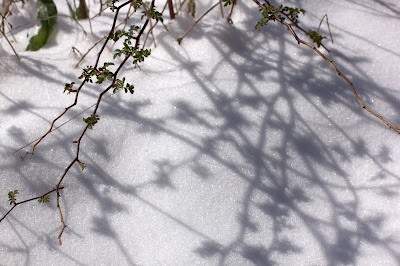 Muskrat channels under the ice are usually hard to spot during any winter from the vantage point of the trails and overlooks.  But with the flash freeze of the last two nights (19º and 15º F. respectively), combined with the muskrats' early spring activity, these channels were quite evident yesterday, both along the entrance driveway and in the flooded forest areas on the eastern edge of the refuge. 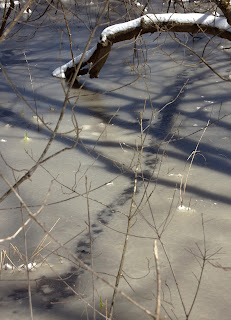 Four and a half foot strides along the cross dike trail would have gotten my attention in themselves, but these tracks had bare feet!  Though likely wearing toe shoes, these tracks were startling to see on a morning with a single digit windchill.  The unusually large foot size and stride along with the bare footprint  were the closest evidence I've seen yet for the Sasquatch that's often reported on the refuge chalkboard! 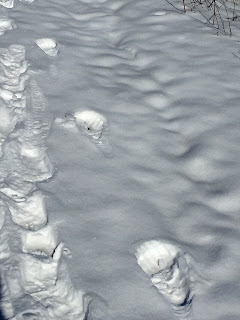 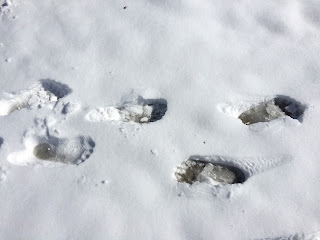