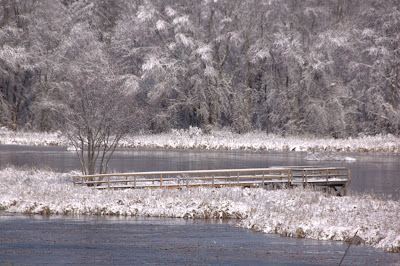 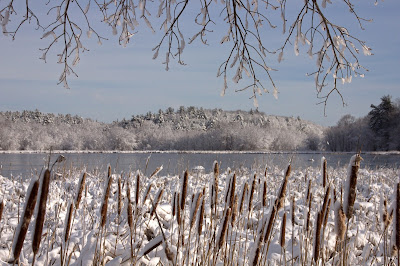 Along the northern edge of the refuge, which borders the river, the floodplain forest provides protection from prevailing northwesterly winds and exposure to the south allows the sun to warm this area more quickly from September through April.  It is here, during the colder months, that I most often find lingering gossamer strands in the late fall, fleeting displays of hoar frost on winter mornings, bluebirds feeding on sun-warmed insects, and the first buds to open in late March. 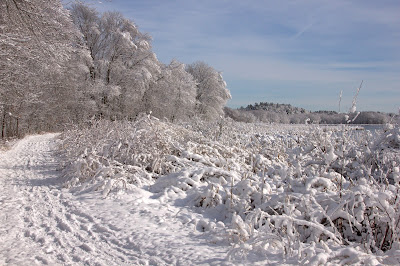 Along this northern boundary, between the river and the trail, an increasing number of river birch (Betula nigra) have taken hold.  I only recently found out from Concord's botanical historian, Ray Angelo, that river birch doesn't have a native claim to Concord soil - though they are native within the Merrimack River valley.  Thoreau and his botanical colleagues made no mention of it in the 19th century.  Not until 1957, did botanist Richard Eaton document the first naturalized colony by the old railroad bridge abutment along the Sudbury River just upstream from Egg Rock.  Some of the town's largest river birch still grow between that point and the Lowell Road bridge, but these radiant peeling-barked trees have become well-established along the Concord River and are spreading rapidly throughout the refuge's floodplain.


This serene morning scene reveals an unusual stillness in the air.  The Concord River makes a wide turn here, near the mouth of the inlet channel to the refuge.  During winter months, when the impoundments are frozen over, geese and ducks congregate here to feed and bathe. 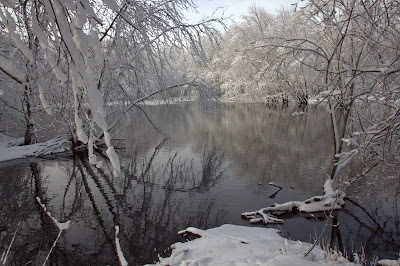 Wildlife activity is always high, here between the inlet channel and the impounded marsh.  The fresh snow reveals the busy residents.  Activity is unusually high for early February, since this snowfall follows several days with record temperatures above 50º F. and a thawing of ice and soils.

Many visitors have noticed signs of increase beaver activity (tracks, wood gnawing, and scent mounds) between the boat landing and the inlet channel.  Just above the control dam, beaver have had a busy morning hauling in and out.  A new, inconspicuous beaver lodge, a short distance upstream, may account for their noticeable re-newed interest in this area.

Many smaller rodents frequent this same area each winter.  Lots of mice were out early.  I watched a harrier (marsh hawk) patrol this area later in the morning, no doubt alerted by all the tracks.

Reflecting on the uniquely sculpted forms that arise as each detail in the landscape accepts the snowfall, Thoreau wrote, "So one divine spirit descends alike on all, but bears a peculiar fruit in each, divinity subsides on all men, as the snowflakes settle on the fields and ledges and take the form of the various clefts and surfaces on which it lodges." [Journal, Jan. 30, 1841]

On this morning, divine inspiration was also made manifest through the collaborative conditions of a very moist snowfall combined with unusually still air (especially at Great Meadows) and mid-morning temperatures still in the low 20's.  Those few of us who were walking these protected stretches of trail at that moment were stunned to witness the very rare event of hoar frost growing on the snowpack before our eyes. At first, the sculpted snow took on a furry appearance.  Then, over the course of just thirty minutes, the crystals lengthened and articulated into glorious plates and "feathers," particularly around open holes.  With the warming sun causing just enough moisture to evaporate from the snowpack and and through vents from the muds underneath, it flash froze in contact with the air forming crystals that quickly compounded themselves.  Then just as quickly, the sun warmed to the point that all the delicacies melted away. 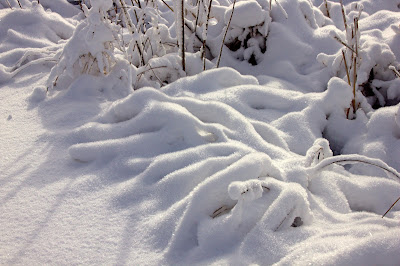 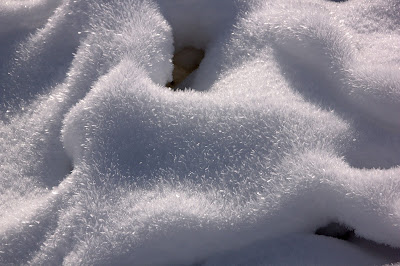 Thoreau, too, experienced this wonder in early February, chronicled in this lovely passage, "Those small holes in the ground - musquash, mice, etc. - thickly beset with crystals of frost, remind me of the invisible vapor issuing thence, which might be called the Earth's breath...  [Journal, Feb. 12, 1858]