Sugaring Off at Gaining Ground 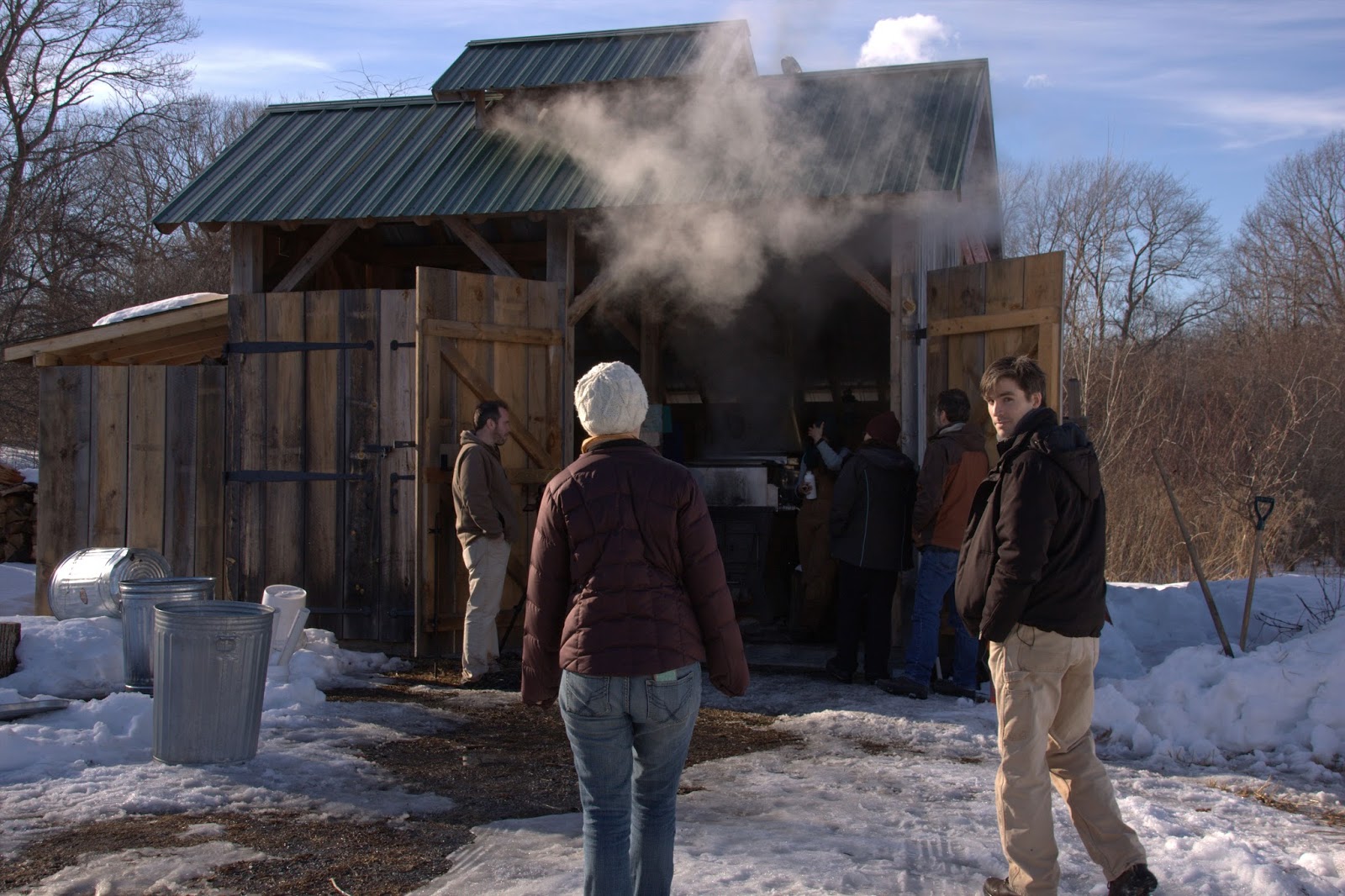 In the teasing warmth of this afternoon, we visit the Gaining Ground sugar house for one of their first boils this season.  Like a bit of Vermont in our own neighborhood, the perfumed steam breathes out the door and roof vent, while visitors gather around the boiler to share stories of their sugaring memories and make acquaintances.  Gaining Ground currently taps 175 sugar maples on both public and private land in Concord and Carlisle. The finished syrup is distributed to local food pantries in the greater Boston area.  For more about Gaining Ground's farming mission and who they serve, see http://gainingground.org/our-mission. 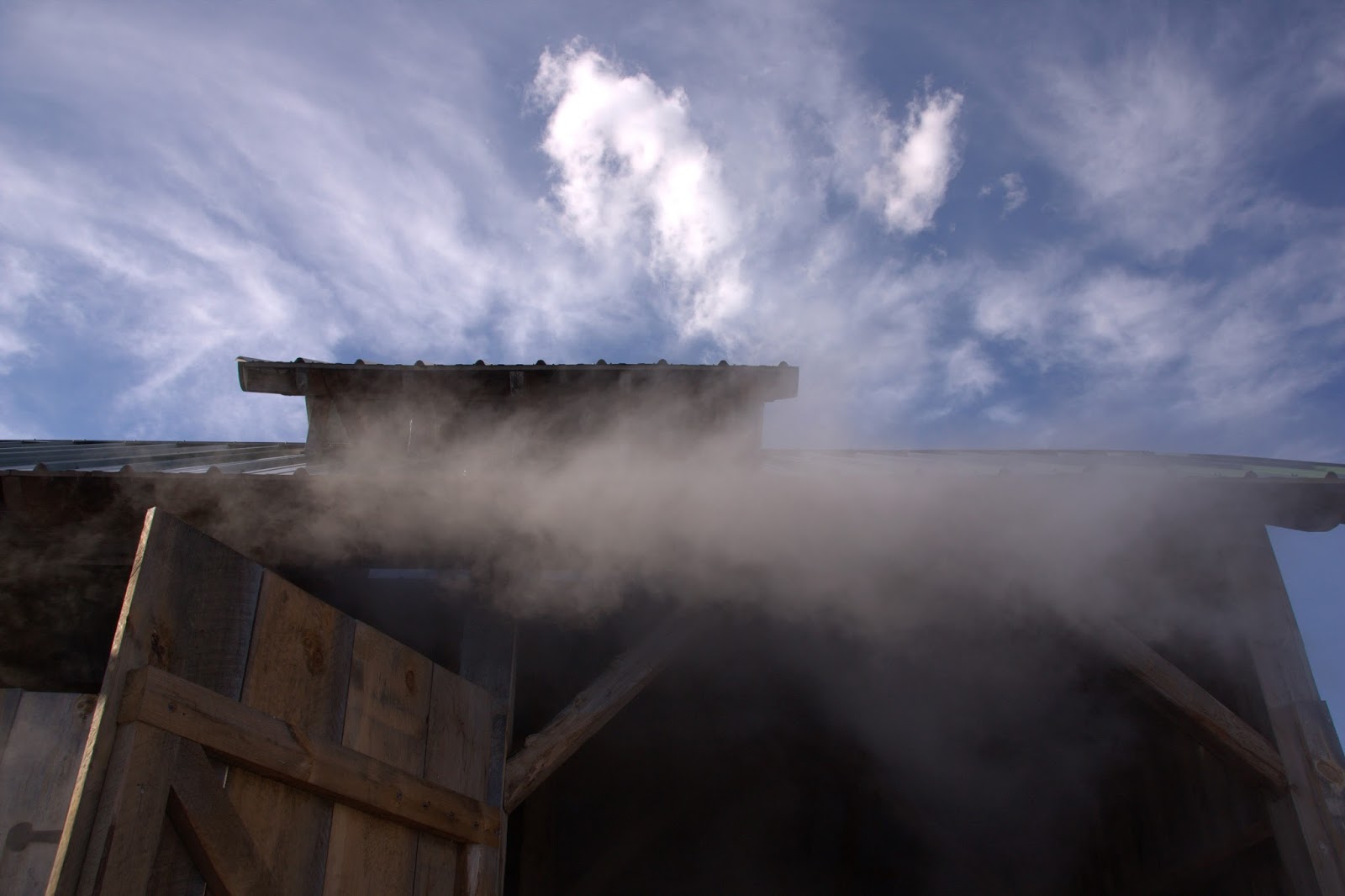 Farm coordinator, Kayleigh Boyle, stokes the fire and introduces us to the workings of their modern boiler.  Sugar boils are scheduled for Tuesday, Thursday, and Saturday afternoons until mid-March, weather permitting, and are open to visitors.  The sugar house is located on the driveway into Gaining Ground and Thoreau Farm, at 341 Virginia Road. 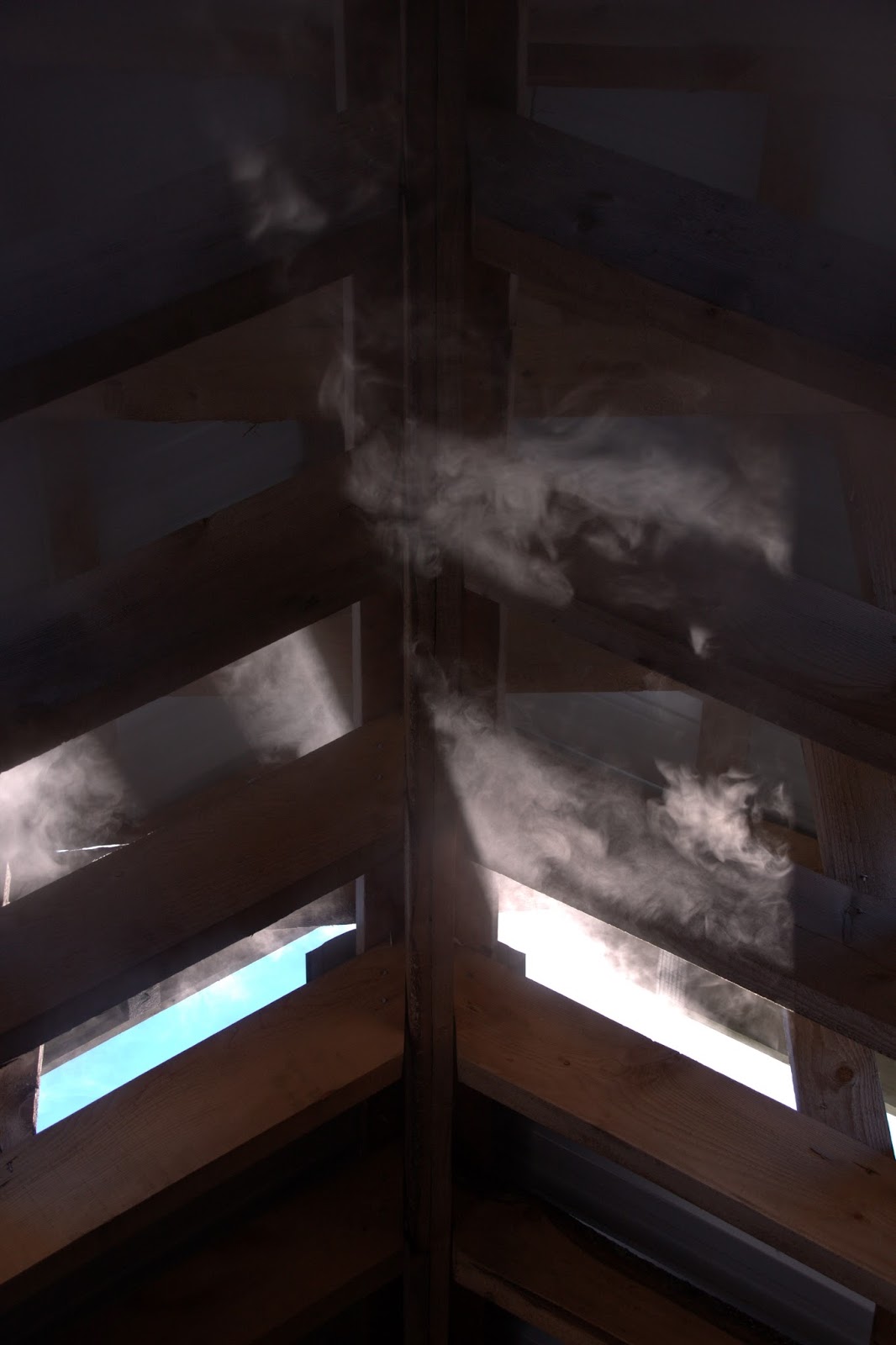 Completing the story...  The sap for the Gaining Ground sugaring operation is collected largely by community volunteers.  The trees that are tapped are mature individual, town-planted setback or park trees and small groupings of sugar maples on private property that were likely planted and nourished over the past century.  There is only one known location for a wild stand of sugar maples in Concord (see below).  The success of Gaining Ground's program should encourage the town to increase the inclusion of sugar maples in its municipal tree planting program to sustain Concord's maple sugar production long into the future.

Stalking Concord's Rare, Wild Sugar Maples
Natural stands of sugar maples are a rare feature on the Concord landscape.  In 1851, Thoreau was alerted to the only natural stand that was known at that time, or since, behind Darius Miles' property near the "Corner" (Nine Acre Corner).  "Found a grove of young sugar maples (Acer saccharinum) behind what was Mile's.  How silently and yet startlingly the existence of these sugar maples was revealed to me... (Journal, Sept 24, 1851).  On November 8, 1860 he added, "The sugar maples occupy, together with oaks of the same size, about thirty rods, or say ten rods by three.  The largest about five inches diameter, but generally quite small.  They have sprung from quite small stumps, commonly not bigger than themselves at most."  Thoreau's description suggests that this copse of sugar maples, covering about .2 acres of woodland, had likely once been used as a woodlot.

According to botanist Ray Angelo, an authority on Concord's historic flora, Thoreau's contemporary Minot Pratt also knew of this site and identifyed the distinctive Orange-fruited Horse-gentian (Triosteum aurantiacum) nearby.  Richard Eaton (Flora of Concord, 1974) never found the stand, nor the Triosteum.  In the 1970's, Angelo was able to relocate both the sugar maple grove and the Triosteum, confirming Thoreau and Pratt's original records. In 2013, directed by Ray Angelo, I relocated, photographed, and marked coordinates for this obscured and relatively inaccessible sugar maple stand.  Fortunately, it now falls almost completely within Concord Land Conservation Trust's Anderson Woods property where it can be permanently protected.

Thoreau, undeterred by the shortage of sugar maples, tapped various other trees - including black and yellow birch and red maple.  On March 21, 1856 (10 am) he wrote, "To my red maple sugar camp.  Found that after a pint and a half had run from a single tube [tap] after 3 p.m. yesterday, it had frozen about half an inch thick, and this morning a quarter of a pint more had run.  It is worth the while to know that there is all this sugar in our woods, much of which might be obtained by using the refuse wood lying about, without damage to the proprietor, who use neither the sugar nor the wood." 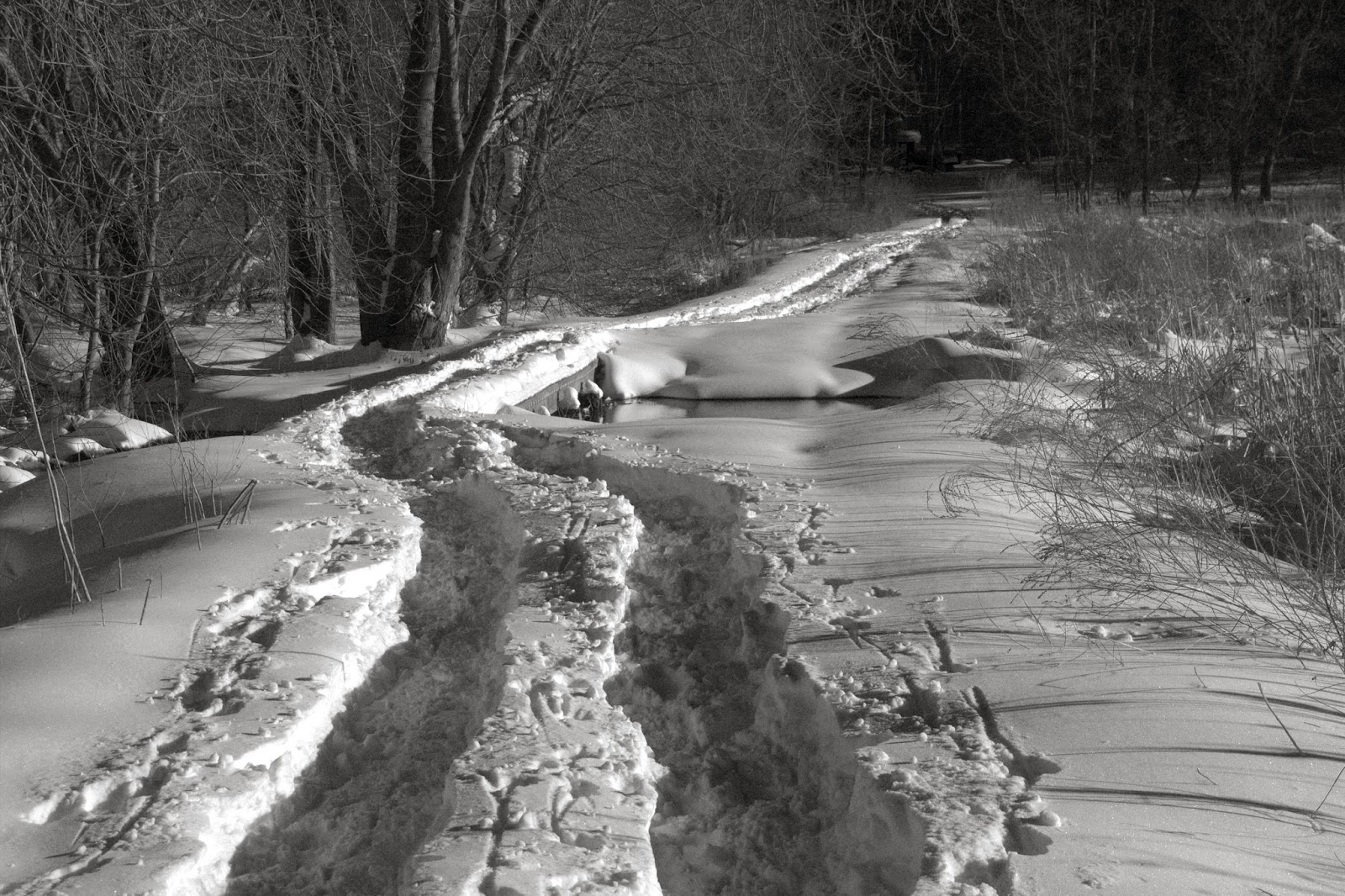 Mid-February brings winter into its fullest glory, perhaps having outdone itself for some this year. Abundant snows, sensually sculpted by piercing swirling winds, accentuate the smallest details in the landscape and create new topographies even in the flattest of floodplains.

Yesterday, fifteen of my monthly walkers, still full of enthusiasm for winter's brighter side, set off through Great Meadows with me to explore this month's latest seasonal revelations. A fresh coating of snow, from the third storm in two weeks, sparkled with winter brilliance and swirled in icy wind gusts across the marsh.  But the warming February sun, dark running waters, and occasional spirited bird song all hinted of spring in the making. 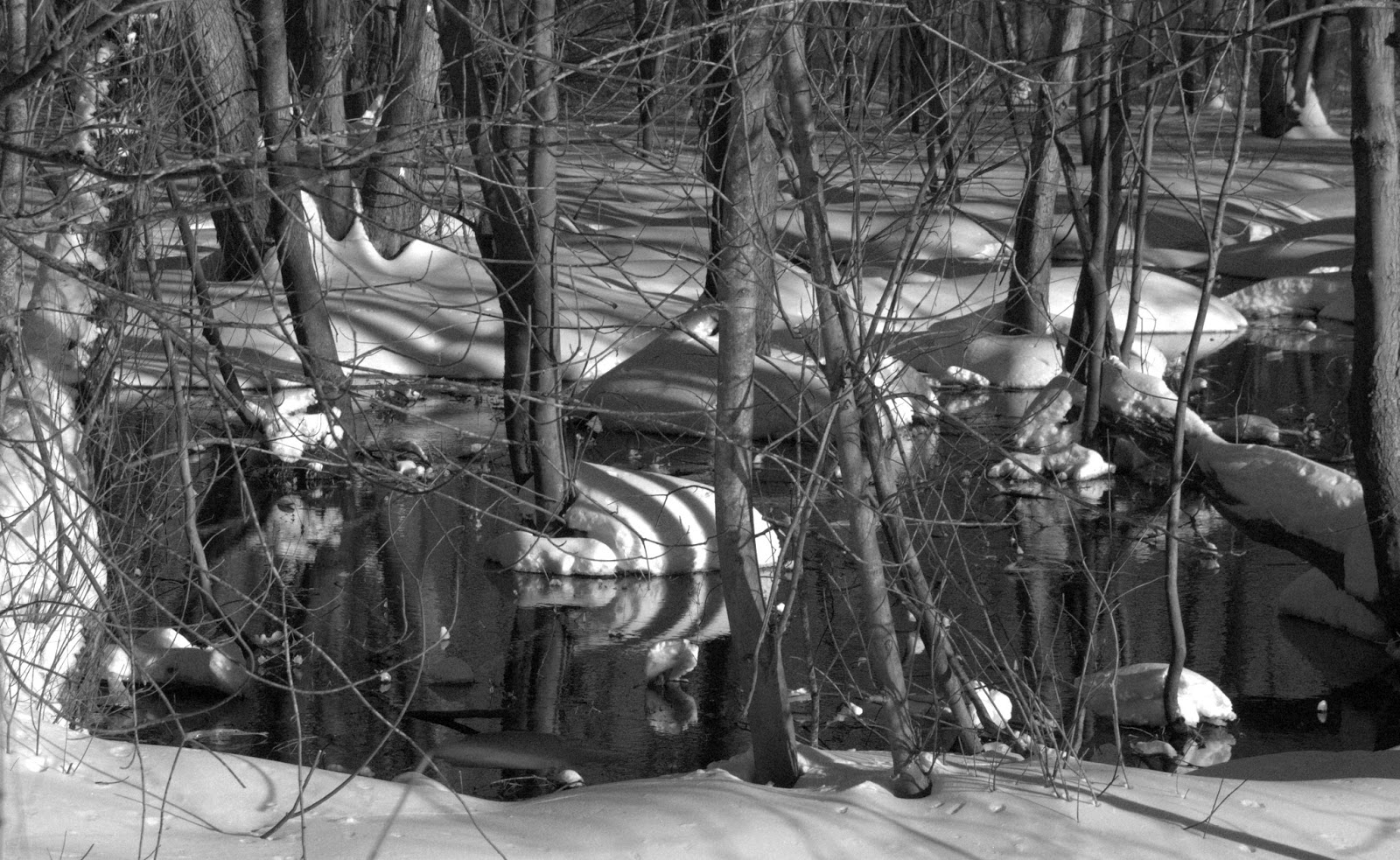 The light and lengthening shadows of late afternoon inscribed abstract patterns across our path, making each step a moment of wonder. 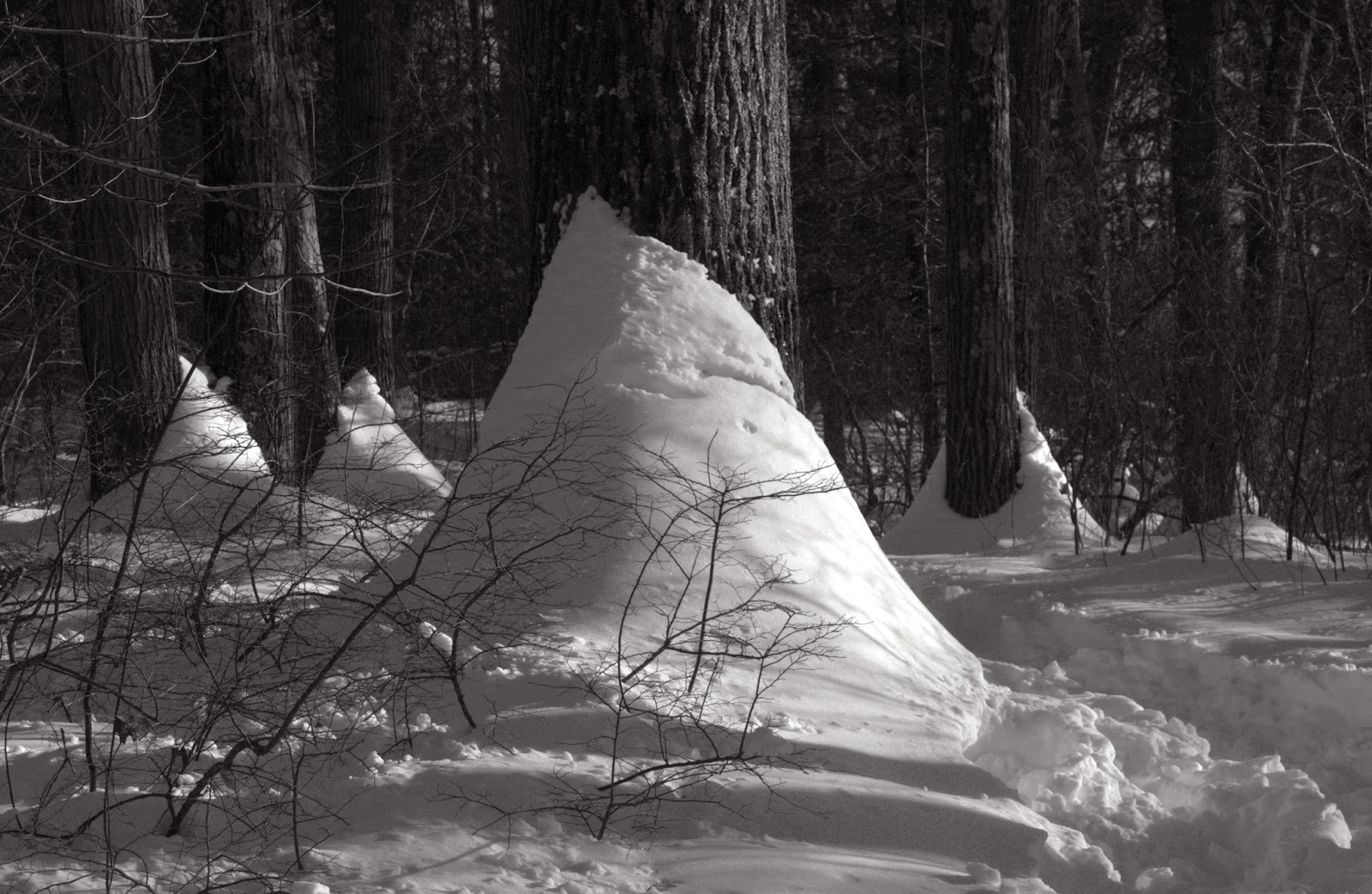 A black-and-white photographer at heart, I revel in the contrasts, contours, and tonalities of this beautiful season! 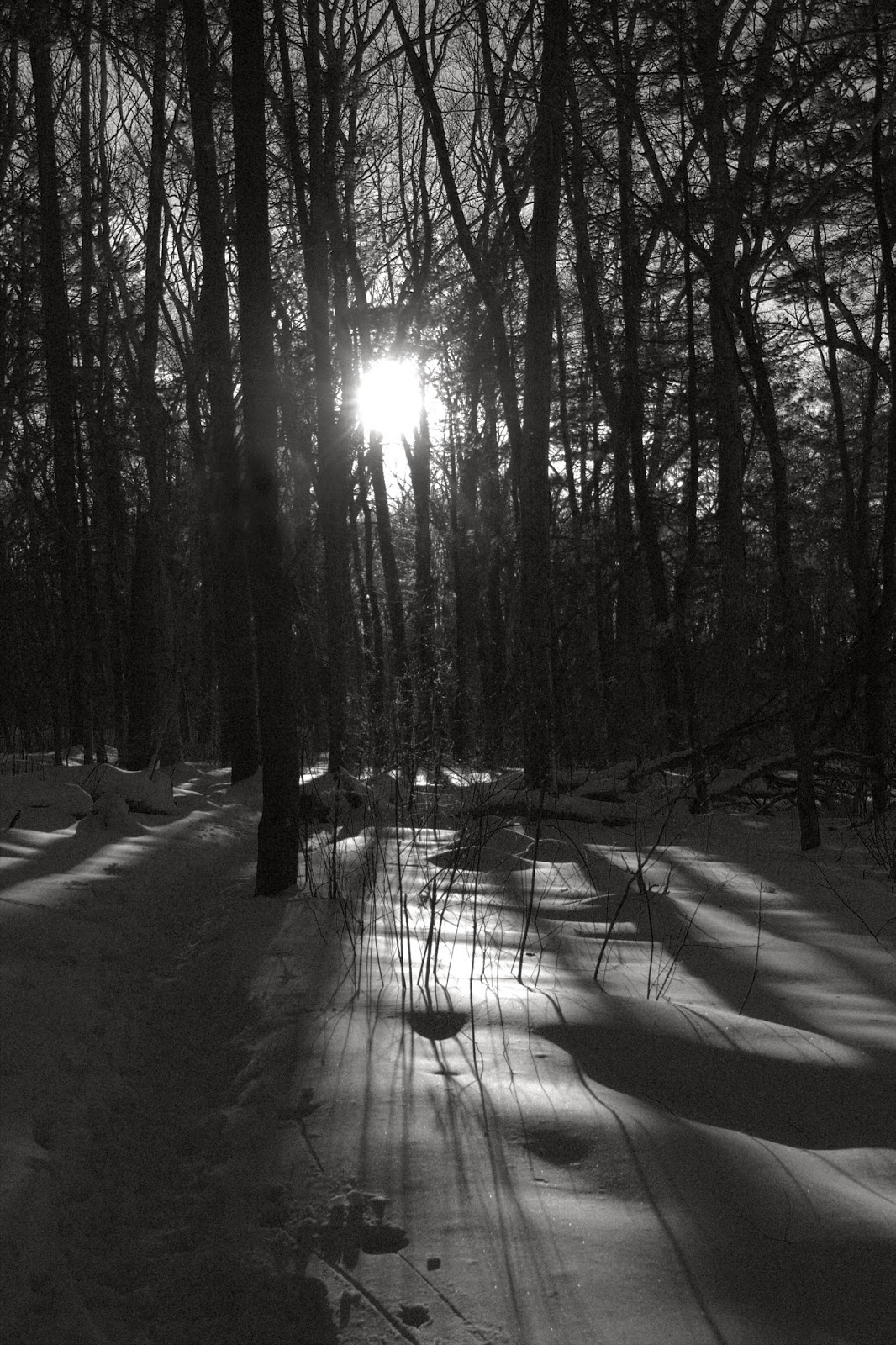