Arrows in the Water

Walking along the Dike Trail at Great Meadows NWR in June, large, thick arrow-shaped leaves often catch your eye.  I am often asked what these are and how to tell the different arrow-leaved plants apart.

Arrow arum (Peltandra virginica) grows close to shorelines throughout the refuge's marshy impoundments.  A member of the Arum family (along with skunk cabbage, Jack-in-the-pulpit, and Duckweeds), it's lush, almost tropical leafy displays are the height of its elegance, since its inconspicuous and petal-less flowers often go unnoticed.  The vein pattern is the secret to distinguishing arrow arum leaves from the leaves of several varieties of resident water plants known as arrowheads (Sagittaria sp.).  Arrow arum veins radiate laterally from all along the mid-vein. 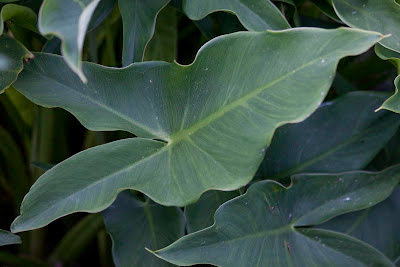 Arrowhead species, members of the Water-plantain family (Alismataceae), have secondary veins that all radiate out from the base of the mid-vein and run parallel to it.  When in bloom, their 3-petaled white flowers with yellow centers do attract attention.

Common arrowhead (Sagittaria latifolia), which looks most like arrow arum, also grows at Great Meadows, but I don't as yet have a photo.

Pickerelweed, which creates great masses of green leaves across the far end of the lower impoundment, often is mistaken for one of the above plants.  A member of the Pickerelweed family (Pontedariaceae) it too has large, fleshy, pointed leaves with a heart-shaped notch at the base and veining similar to arrowhead leaves.  Pickerelweed also has beautiful stalks of purple flowers in June.