I derive more of my subsistence from the swamps which surround my native town than from the cultivated gardens in the village.  There are no richer parterres to my eyes than the dense beds of dwarf andromeda...which cover these tender places on the earth's surface. (Thoreau, Walking, 1862)

Thoreau's reflection has often validated my own deep affinity for Concord's bogs and swamps over its manicured suburban neighborhoods.  The moment when our wetland heaths come into bloom marks an annual highpoint for me that few of even my dearest friends understand.  Leatherleaf blossoms are the first to brighten Concord's boggy kettleholes - from Gowing's Swamp to the Andromeda Ponds and other lesser known depressions.  Thoreau has many references to our modern leatherleaf in his Journal, which he variously called andromeda, dwarf andromeda, and cassandra.  In the record warmth of this spring, I found leatherleaf flowers opening on April 11th, ten days earlier than our earliest known recorded date in the last 161 years.

Thoreau's Andromeda Phenomenon
In 2010, I made a mid-April foray to the Andromeda Ponds, the heath-rich kettleholes that form a staircase of wetlands from Walden Pond down to Fairhaven Bay, as part of my informal survey of Concord's surviving boglands.  That spring was also accelerated due to an early April heat spike.  As I approached the first kettlehole, it glowed in the mid-afternoon sunlight as if contoured by a light snow, perhaps already covered with a premature burst of leatherleaf flowers.  But as I moved beyond and to the south of the wetland, a rich rusty redness replaced these glowing highlights.  This phenomenon continued as I passed by each of the kettleholes and has perplexed me ever since.

Only this week, as I was preparing this post did I discover Thoreau's detailed observations and epiphany about this optical experience, which he called the andromeda phenomenon,  "It makes all those parts of the country where it grows more attractive and elysian to me.  It is a natural magic."

In yesterday's foray to photograph leatherleaf blossoms, this mystery was further revealed. The underside of its gray-green leaves as well as its stems, flower petioles, and sepals appear to be speckled with raised, reddish brown scales. The light refracts differently off of the darker scales and the lighter-colored leaf surfaces depending on our angle of view.  As Thoreau so quintessentially reflected, "These little leaves are the stained windows in the cathedral of my world." 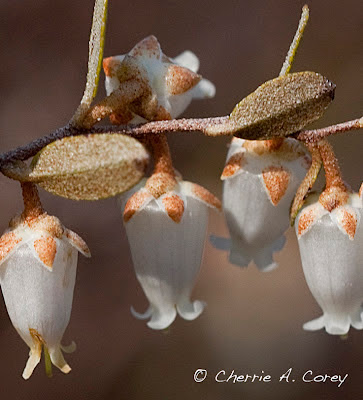 For Thoreau's detailed observations and the quotes included here, see his Journal, Vol. III, April 17 and 19, 1852.