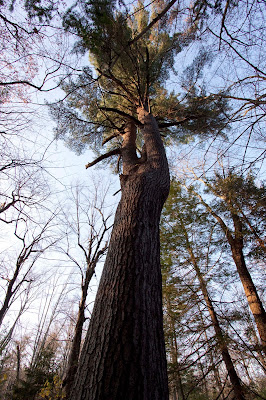 Deep in the protected hollows of Concord's Town Forest, grows a venerable and beautiful white pine, which I met for the first time in the spring of 2010.  Her exuberant and towering feminine form and the hallmarks of significant age, prompted me to call her the Grandmother tree, and I have made many pilgrimages to commune with her since our first meeting.

Her trunk is pillar-like and tall, covered with a deeply furrowed bark that has patches of exfoliation.  Enormous roots brace the tree, looking like large toes curling into the high duff (leaf litter) mound at her base.  Massive limbs at the top rise up to the sky and the light, to hold spare tufts of dark green foliage interspersed with wind-snapped branches. 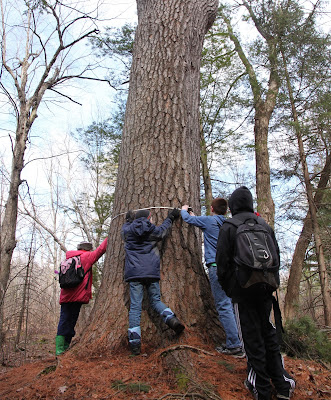 Measuring 13'1" in circumference, she had the largest girth of any pine my homeschool students and I had measured in the greater Concord area, including the Carlisle Pines. In 2015, local arborist and champion tree climber and chronicler, Andrew Joslin, got in touch with me to ask about old trees in the area. He had discovered the grandmother tree himself and obtained all her requisite measurements, submitting the data to a regional database resulting in her being recognized as the current  champion white pine in Eastern Massachusetts. 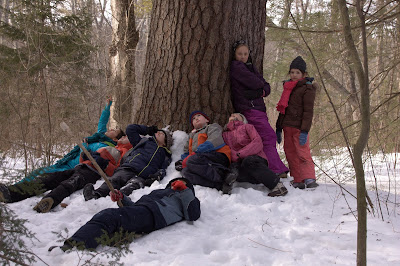 This venerable pine likely was a sapling some 200+ years ago, when Thoreau and Emerson walked these woods.  No doubt, it weathered the 1938 hurricane thanks to the protection provided by the steep glacial kame of Brister's Hill rising to the east.  On this porous slope, not far away, stand numerous, large hemlocks and old yellow birch trees whose shimmering bark are given a touch of added color from a powdery blue lichen.

The wet bottomland of this forest, fed by the outflow stream from Fairlyland Pond, supports a lush growth of skunk cabbage, Canada mayflower, ferns, mosses, and mushrooms that in warmer months further accentuate the primeval atmosphere of this special place.  These trees grow in the corridor between the pond basin and Old Cambridge Turnpike that Thoreau called Clintonia Path, for the green bluebead lily flowers that lined the footpath in June. 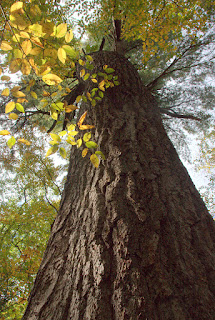 For a glimpse of Grandmother tree in her winter repose, see Snowy Giant in Fairyland.

Update:  As of 2017, this grandmother tree's status as the champion white pine in Eastern Massachusetts has now been surpassed by a white pine in Lincoln, MA.