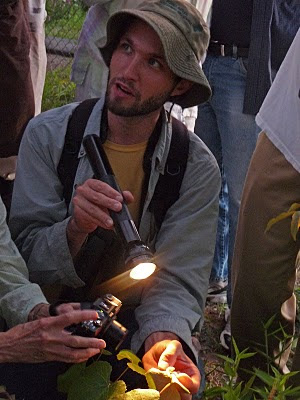 Sam Jaffe shows us a Hog Sphinx caterpillar munching on fox grape leaves.
On July 25th, we had a wonderful evening of up close and personal caterpillar encounters led by our informative and inspiring guide, Sam Jaffe. Some thirty participants turned out as a brief shower was clearing, punctuated by the flash of a rainbow and brilliant long rays of the evening sun.  The evening began and ended with some very special finds and was bathed throughout in moonlight and the distant glow of lotuses, laid out like snowy fields.
Caterpillar introductions included:
Harvester Butterfly (Feniseca tarquinius), as many as six caterpillars feeding on wooly aphids on speckled alder.  A sought after species in the butterfly world!
Red-spotted Purple (Limenitis arthemis astyanax), a single second instar caterpillar feeding on a black cherry.  The caterpillar eats away the flesh of the leaf blade at its apex and rests exposed on the remaining mid-vein.
Red Admiral Butterfly (Vanessa atalanta), a single early instar on a nettle plant.
Silver Spotted Skipper (Epargyreus clarus), a few early instar caterpillars in their folded leaf
enclosures.  There are many of these caterpillars at Great Meadows, worth searching for them in a week or two after they grow up a bit.
Spicebush Swallowtail (Papilio troilus), one large final instar caterpillar rolled up in a sassafras leaf and a few early instar caterpillars on nearby plants.
Blinded Sphinx (Paonias excaecatus), a single fourth instar on birch
Hog Sphinx (Darapsa myron), a single pale green early fifth instar caterpillar on grape
Elm or Four-horned Sphinx (Ceratomia amyntor), a fourth instar green morph on elm near the river.  A remarkable caterpillar!
Double-toothed Prominent (Nerice bidentata), three or four third instars on scrubby looking elm at near river.  Would be fully grown in ten more days!
Maple Looper (Parallelia bistriaris) - We found very early instars of these on red maple bordering the parking lot.
An autumn caterpillar foray will be scheduled for this fall and the date posted soon.  For great caterpillar photos and ID guide, see Sam Jaffe's website http://www.pbase.com/spjaffe/massachusetts_caterpillars (also under links on this blog).
Posted by Cherrie at 12:31 PM